A rescue mission turned deadly after a helicopter crash took the lives of 2 people on board. According to the Associated Press, the helicopter accident took place after a hiker was reported lost. The helicopter pilot, Sgt Andy Tingwall, had rescued the lost hiker, but the helicopter then crashed into the side of a mountain. 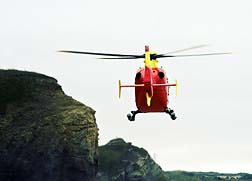 According to the Santa Fe New Mexican, Tingwall detected bad weather as they arrived at the mountain and told Officer Wesley Cox, the sole survivor of the crash, that they would have a short time to get out of the area. They then pulled the lost hiker into the chopper and strapped her in. As they lifted off, Tingwall reportedly told Cox the tail rotor might have clipped something. Although the pilot got the helicopter under control, the craft went down, hit a steep mountainside and rolled down between 800 and 1,000 feet.

Both Tingwall and the hiker, Megumi Yamamoto, were thrown from the helicopter as it rolled. Cox remained in the chopper and checked on Yamamoto, but she was reportedly already dead. Tingwall initially survived the crash but died during the night.

Cox suffered serious leg and back injuries but managed hike approximately a mile before being rescued by a search team. The New Mexican reports that Cox's right leg was crushed in the accident and he was hypothermic when he was found. He has since undergone surgery.

Yamamoto was a graduate student at the University of New Mexico. She was originally from Tokyo. She called 911 from her cell phone to report that she was hiking with her boyfriend but had become separated from him and was lost. Yamamoto was found a few hours after the phone call.

The New Mexican reports that just after the helicopter took off, police dispatchers received a radio from Tingwall, who reported that the helicopter had hit the side of a mountain.

Poor weather may have been a factor in the chopper crash, however investigators have not said for certain why the helicopter crashed. The area the helicopter was in was described as rough and rugged and even the most experienced pilots had difficulties in that region, including one pilot who reported his helicopter almost flipped over during a flight. He was able to right the aircraft, but said that was during the day and in good weather.

Meanwhile, a wrongful death lawsuit regarding a helicopter crash that took the life of a camera operator and caused serious injury to 2 other people has begun. The crash occurred during production of a movie called "The Final Season." Lawyers for victims of the crash allege the helicopter's safety blades, designed to break power lines, failed, causing the accident. According to the lawyers, the safety blades were shortened and a critical sharp edge was removed to cut costs.

More HELICOPTER CRASH News
However, lawyers for the company that manufacture the helicopter, Bristol Aerospace, say the helicopter's pilot should have been more aware of his surroundings. The company says that while the blades are designed to prevent accidents, it is still vital for helicopter pilots to avoid power lines.

A lawyer for the pilot says the pilot was not notified of all the obstacles along the route that filming was to take place. Furthermore, the lawyer argues that the crew's lack of communication was a contributing factor in the helicopter crash. The film's producer was seriously injured in the crash, suffering a shattered spine and shattered legs and ribs.

The helicopter accident occurred when the helicopter became snagged on power lines and crashed. According to the Des Moines Register, the helicopter was between 30 and 50 feet above the ground and was traveling at approximately 55 miles per hour to film cars moving along a highway.