"My fiancé and I found a house to rent, lease or sell on craigslist," says Carolyn, "and the owner agreed on $700 per month with a $5,000 deposit so we could buy the house. But after only one month we found so many things wrong, because of Chinese drywall". Professional Building Inspectors were brought in, determined that there was a "significant amount of corrosive vapors being present in the home," and reported the house was a "high risk". 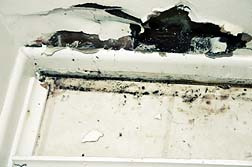 Carolyn says she was first concerned about Chinese drywall problems after reading so many complaints on the Internet. Two weeks ago, they paid Professional Building Inspectors in Ellenton $250 to check their home for Chinese drywall risk assessment, and the inspector's report confirmed their suspicions.

"The inspector first went into the garage and inspected the air conditioning," says Carolyn. "He saw that all the copper pipes were black—you can put your finger on it and it rubs off like soot. Then he went into every room, took off all the outlet covers of the electrical plugs, pulled out the wiring and every wire was black. Then he found that all the copper wires on the fridge were black.

Carolyn says all the appliances malfunction and they just spent $200 to get the washer fixed, and replaced faucets on the kitchen sink—the photographs from the Professional Building Inspector report shows that the fixtures are black—they were once chrome colored. And according to more photographs in the report, the bathroom faucets and the pipes under the sink have the same problem. "The dryer will run until next year if you don't open the door because this drywall deteriorates all the appliances," she says. "When we pulled the fridge out, all the pipes were black; they were all corroded.

"Our A/C doesn't work very well either," adds Carolyn." It can't get cool enough. Right now it's 81 degrees inside the house and I have the temperature set for 77 degrees."

And she says the entire house smells like rotten eggs. The inspector's report states: "Yes an odor is detected upon entering the home." Of course they are also concerned about their health. "I sneeze and cough constantly and my fiancé has to use nose spray at least 7 times a day," says Carolyn. "Can you imagine what that is doing to our bodies and our dogs, just breathing this stuff? I heard this really affects animals and I don't know if they should stay in the house; one of our dogs is about to have a litter…"

Carolyn and her fiance are caught between a rock and a hard place. "We can't afford to do anything until we get our money back," says Carolyn.They are trying to get their $5,000 returned and move ASAP. "Our contract states that if we don't buy the house, we can get our deposit back," she says. "We moved here at the end of March. We paid a management company who was supposed to hold the money in an escrow account but instead he paid the owner—so far neither the management company nor the owner have returned our calls."

Anthony Gimenez, a certified building inspector licensed with International Code Council (ICC) and American Society of Home Inspectors (ASHI), inspected Carolyn's home. He says that in Carolyn's case, the smell of rotten eggs could be coming from well water that produces hydrogen sulfide— the rotten egg smell. "So we can't go by smell alone, but it is a helpful indicator," says Giminez. "We are also gathering as much information as possible to determine the risk. We did smell an odor coming from the water, but the majority of time I smell sulfur the house is on well water, so I don't give much credence to it. However if I smell sulfur, like a burnt match or burnt firecracker, that is a different matter. According to the Environmental Protection Agency (EPA), sulfur is in Chinese drywall."

" I am coming across a lot of builders who are not even aware if Chinese drywall was used because they hired subcontractors so it is difficult for them to know unless they go back to the supplier," says Giminez. Carolyn's drywall is stamped "American Gypsum Company" and Giminez says he hasn't heard that this company supplied Chinese drywall, but most of the time he finds more than one kind of drywall in a home. "Sometimes there could be drywall from 4 different manufacturers and I'm not sure why," he says. "Maybe it was due to a shortage at the time and some drywalls have different applications. For example, bathrooms require moisture-resistant drywall and garages are supposed to be built with fire-resistant drywall."

More CHINESE DRYWALL News
Professional Building Inspectors has conducted about 150 inspections since January of this year, and Giminez says more than half of them have Chinese drywall problems. "I am seeing a fair amount of this the more I go further south," he says. "Naples has a lot, and so does North Port, Port Charlotte and Manatee County.

"Other than an inspection, a sampling can be the next step," says Giminez, "but it is very expensive and in most cases not necessary because most builders will respond once they get our reports. Oftentimes they will send their crew to verify what we found and the builders in my area will deal with the homeowner directly—move them out, tear out the drywall, remove damaged electrical components, wires, appliances, anything with metal including computers, everything electronic. I have even seen the back of circuit boards—they are black."

And if a builder doesn't respond? You may want to seek legal help.