Now, as more reports of people committing suicide while taking Zyprexa are made public, more family members realize that it may have been the drug, and not their loved one's disorder, that caused them to commit suicide.

One comment that is repeated over and over again by people complaining about the suicide risk in Zyprexa patients is that they were not suicidal before taking the drug. This is reported both by patients who took Zyprexa and the family members who have lost loved ones to suicide. Many people who took Zyprexa and complained about suicidal thoughts say they had never had such thoughts before taking the drug. 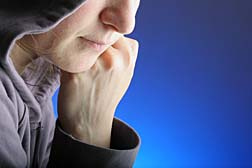 As one interview subject pointed out, before taking Zyprexa her life had been going fairly well. She was simply given Zyprexa to help treat bipolar disorder, but suicide had not been something that even entered her mind. However, within weeks of starting the drug, she became suicidal, coming to the point where every day was a struggle not to kill herself. She says that at the time she did not fully understand why she wanted to commit suicide, she just felt that she had to.

It was not until after her ordeal was over that she realized the drug she was taking could have caused her suicide attempts. Luckily, she survived her ordeal but countless others may not have. Their families could still be blaming their loved one's disorders for the suicide without realizing that Zyprexa could have led to their suicide. In fact, the rate of completed suicides linked to Zyprexa is higher than the rate associated with any other atypical antipsychotic, the class of drug that Zyprexa belongs to.

Some patients taking Zyprexa report that they have suicidal thoughts continuously and wake up trying to figure out how to commit suicide. Many have more than one suicide attempt and because their doctors do not realize that the suicide attempt is related to Zyprexa, the patients are given either an increased dosage of Zyprexa or a deadly drug combination that also increases their suicidal ideation.

More News
It is a deadly cycle that rarely ends well for the patient. Those who complain about suicidal thoughts are often not taken seriously because, as patients diagnosed with mental disorders, their opinion is neither credible nor important. Unfortunately, because the medical and pharmaceutical communities are not listening to their concerns, patients are dying and their suicide is being blamed on their mental condition rather than on the drug they were taking.

It is not okay to dismiss someone's death simply because they had bipolar disorder or schizophrenia. Simply assuming that they committed suicide because of their disorder allows pharmaceutical companies to continue marketing their drugs as safe when they may not be. If Zyprexa is responsible for the death of loved ones, then family members have a right to know. Furthermore, future patients have a right to be properly informed of all risks associated with Zyprexa before they decide whether or not to take that particular drug.

Posted by
Princess April Ann
on January 19, 2011
I want to improve my health I should make myself feel better.