The FDA decided Wednesday that the injectable form of Zyprexa, a drug manufactured by Eli Lilly & Co. was safe to use for some patients with Schizophrenia. This decision was made by the panel, which is comprised of outside medical experts, states that there are restrictions that come along with this approval by the FDA regarding the use of the long-acting drug due to past issues with Eli Lilly & Co. regarding the link between over prescribing of the medication for disorders not approved by the FDA and an increased risk of suicide.

While the majority of the panel stated that the product is indeed effective in the treatment of schizophrenia, they did express concerns that the drug has been associated with incidents of "profound sedation" that has been known to be so severe that it resulted in a loss of consciousness and even caused a coma in patients who took part in clinical studies being conducted on the drug. However, the 10-voting members seated on the panel stated that the product needed to be approved in order to treat certain patients with schizophrenia. One member of the panel abstained from voting. 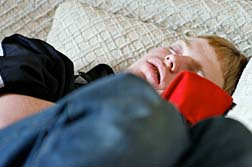 This news comes after previous conflicts with the drug, which has resulted in a possible $1 billion fine imposed on Eli Lilly and Co. for the company's marketing practices of Zyprexa. Rumors also state that there is a possibility the company could plead guilty to a misdemeanor charge. This guilty plea would be due to a settlement between federal prosecutors and the company. What the fine entails is that Eli Lilly & Co. convinced doctors to prescribe the drug for patients with dementia and for those diagnosed with depression who also had mild bipolar disorder. The FDA had approved the drug to be prescribed in the treatment of bipolar disorder and schizophrenia. As a result of the prescriptions being written to patients with dementia and depression with mild bipolar disorder, there was an incidence of increased suicide amongst these patients. It is an illegal practice within the United States for a drug maker to market their medicines for uses that are not approved by the FDA.

As for this latest development, clinical studies conducted on 2,045 patients showed that 24 who were exposed to the long-acting form of Zyprexa encountered severe sedation. The sedation lasted anywhere from one to three hours and had an effect on around 1% of the patients who were given the injection. There were at least two cases in which the patients were comatose after being injected with the drug. All patients recovered fully and most continued to receive the injections.

Due to the risks associated with Zyprexa, the panel has recommended that the patient should have a chronic history of non-compliance with oral medications. However, it was suggested that other treatments be tried first prior to using the long-acting form of the medication.

More News
Schizophrenia is a very severe condition, which is chronic and is quite disabling. It interferes with how a person thinks and 1% of Americans have the disease. Those with schizophrenia hear voices and may even believe that others are controlling their thoughts, trying to read their minds, and may be even plotting to harm or kill them. This disorder frequently leads to suicide and is usually diagnosed in people while in their late teens or even in their 20s. However, the suicide risk associated with Zyprexa was completely unrelated to suicide cases as a result of the disorder itself.