When Sarah D. was only a child she was put on Zyprexa to help control the mood swings associated with her bipolar disorder. Beth (Sarah's mother) says that they tried several drugs, but from around age eight to age fourteen, Sarah took Zyprexa. According to both Beth and Sarah, it was only a matter of months after her prescription began before Sarah started cutting herself. 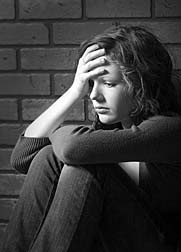 "She would cut herself and hide the cuts. I had to hide the knives from her. She never had to be hospitalized—it never got that far. But she would talk about how suicidal she was, so it was still fairly serious.

"Her dad and I could not understand why—she is a beautiful daughter—why all of a sudden she was feeling terrible about herself. Her self-esteem plummeted. She was fixated with cutting herself. And she would use other things, not just knives. Pencils, ink pens, nail cutters...anything. She started having bizarre behaviors like crawling under tables and desks at school. She would dig into the door and furniture and carve things like, 'I hate myself,' or 'I'm gonna kill myself,' or 'die, die, die,' and then cover them with posters. I only found out about that when a poster fell off the door. But they didn't take her off Zyprexa.

"Now, she looks back and realizes that she doesn't know where those behaviors came from."

Sarah (now 16 years old) says that she remembers some of her time on Zyprexa, but not all of it. "I felt depressed a lot of the time," Sarah says. "I didn't like taking it. It made me so bad and I didn't like feeling bad. I had low self-esteem. That has changed since I stopped taking it. My esteem has gone way up. I was happy to stop taking it."

She says that she cut her arms almost every day, but does not know what she was thinking when she did. "My mind was rambling, I don't know what was going through my head. It affected how I thought—I couldn't think straight most of the time I was on it."

More News
Both Beth and Sarah agree that Sarah's behavior took a turn for the worse only a few months after she started taking Zyprexa. She has now been off Zyprexa for two years and in that time has stopped cutting herself and no longer experiences suicidal tendencies.

Like many other people, Beth wants to see Eli Lilly pay for the harm she believes Zyprexa has caused. "I am going to follow up with this," Beth says. "I'm convinced it was that drug. I don't think she would have acted like that if she hadn't been on Zyprexa."