Many patients who are given prescription medications want to be good patients, so they dutifully follow their doctor's advice and take their meds. Unfortunately, in some cases, such as Zyprexa, the medication can make the patient a lot worse. Not realizing that the problem is the medication, the doctor increases the dosage, compounding the problem. The patient, not wanting to question the expert's opinion, is stuck on a vicious cycle of taking the drug, having side effects, taking an increased dosage and having even worse problems.

This is what happened to Katherine Baker. At the end of 1999, she was prescribed Zyprexa for bipolar disorder and Post-Traumatic Stress Disorder (PTSD). At the time, Baker was told that Zyprexa would make her feel much better.

"I had moved to Seattle to leave an abusive husband and things were going good," Baker says. "I expected that therapy would help things to go better than they already were. They were going well, just not great. After I underwent a stressful lung surgery, I was put on Zyprexa to treat my bipolar disorder and PTSD. 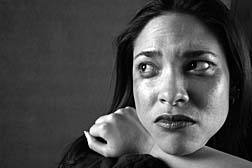 "During the four years I was on Zyprexa, there were so many suicide attempts, I can't count them all. There was one that was especially bad. When I was found, the deputy who found me thought I was dead. I was in a coma in my vehicle for four days and the hospital in a coma for nine more. I believe I was kept in the ICU for around 11 days before being transferred into the psych unit. During my time in the vehicle, my leg rotted from pressure wounds. There was permanent damage to my back, leg, ear and kidney. It took years of recovery and physical therapy to learn how to walk again because they removed part of my calf.

"The years I was on Zyprexa were a constant battle to stay alive. I couldn't understand how I had gotten to that condition so fast. Before Zyprexa I had been active and slender. I held management positions and had been very functional. The 'experts' said 'sometimes this happens—it's a delayed reaction to your life.' I bought into it.

"Suicide was never an out-of-mind thing. The worse it got, the more they increased the dose. I went along with it because they were the professionals. But I ended up with major slashes on my wrists and arms. Not just shallow slashes: I cut ligaments and tendons.

"To find out later that it was avoidable is really hard. And my kids were there for that and I couldn't explain it to them because I didn't understand it myself. But when I changed doctors and got off of Zyprexa, within six weeks I was completely different. I'm still bipolar, and that's not a lot of fun right there, but I'm not fighting for my life every day. I don't wake up every day with the thought, 'I've got to kill myself. How do I do it? Where's the access? Where's the bus to step in front of?' That compulsion wasn't there before Zyprexa and it isn't there after.

"They [doctors] knew about the risks and not only sold it, but pushed Zyprexa as something that would help people. Most of the time, the doctors won't listen if it's a mental health issue, because your opinion doesn't matter. In trying to be a good patient, I stayed on my meds. I did what they told me: 'Keep taking it, take a higher dose,' and it almost killed me.

"I had three different times where I spent three or four days in a coma. I have to have regular tests to ensure my liver and kidneys are working properly because of the number of overdoses I experienced. If I wear shorts or anything but sleeves down to the thumbs, people can tell that something isn't right.

"Zyprexa was supposed to be something that was really wonderful—that's how it was pushed. The higher the dosage, the more extreme the attempts and the closer I came to succeeding. During the Zyprexa years, an ambulance in front of my house was almost as regular as a school bus. Periods where I wasn't actively suicidal were because I was too tired. If I could have gotten up the energy to commit suicide during those times, I would have, but I was just too tired. I didn't have enough energy to do anything but have a heartbeat and breathe.

"People do not understand what it's like. Some nurses at the hospital would say things to me, like, 'You shouldn't kill yourself, you'll go to hell.' They didn't understand, I was already in hell.

More News
"When I changed doctors and told my family practice doctor about my concerns and suicide attempts, he changed my medications. After a few weeks I started doing better. After six months of not being an inpatient at the hospital, I had a celebration with the staff because I had come to know them so well. They said 'If you can go six months, you can go a year.'

"So, now it's been four years. I haven't been suicidal since six weeks after I stopped taking Zyprexa. I can't believe that at one point I was paying $36 a day to take a pill that was making me so much worse than I had been before. There's a lot that I can't do physically now that I could do before my time on Zyprexa, but I have to look at it as what I have left. I could have died any number of times. It was several years of just pure hell."

Posted by
shelby
on January 17, 2018
I was put on Zyprexa to help with my depression and OCD. I was optimistic and told not to look up the side effects. That should have been a warning sign right there. Initially my mood improved and I had a pep in my step. However, I was having thoughts of paranoia and the OCD was getting worse. I did not attribute this to the medication, but instead blamed in on my mental state. I did start making statements that I thought my son would be better off without me, yet again thought this was due to my depression and didn't stop for one moment to consider that the medication may be making things worse. I was telling the doctor that I was having suicidal ideations and he was dismissive. He opted to up my dose of Zyprexa, which of course only made things go from bad to worse. As if this was not enough, he later ended up adding Depakote to the mix. This is when I started feeling really out of sorts and began to isolate and not leave my house except occasionally to get a blow out or go to another doctor's appoinment. This should have been a major warning sign that something was awry. My doctor never warned me of any negative side effects, yet I never bothered to google anything (which is strange because Igoogle everything).

Well....it wasn't long before the suicidal ideation turned to actual attempts. On my birthday, while my family was waiting for me at home to give me my cake, I was busy running my car in a garage in hopes to end my life. That would be the first of many attempts. I later ended up renting hotel rooms with the mindset that I would jump off the balcony. I tried cutting my wrists. I rented houses to again run my car in the garage to die by affixiation. I bought rope to hang myself. I took large doses of pills and mixed them with alcohol. All the while I expressed my desire to die and yet I was not being taken seriously nor were my meds changed up. I once showed up at my therapists office higher than a kite on morphine and she told me to drive safe and eat something when I got home.

I eventually found another shrink and he was using me as a lab rat. One of the many meds he prescribed was Seroquel. This landed me in the hospital as I took a copious amount of pills, drank wine and snorted morphine. Yet, I did not stop taking the fucking pills that were given to me. I later went on to take a total of eleven different antidepressants that were prescribed and all worse then the next. I also ended up in three different detox centers and one treatment center. Meds have literally ruined my life. One of the last attempts I had at taking my life involved taking huge doses of Unisom. I was lucky to survive I guess. I thought I had brain damage though and enlisted the help of an in home (supposedly all natural) IV therapy service. Little did I know that this would be worse than anything that I could have possibly been prescribed. This shit screwed with my brain chemistry and now I am afraid for my life. Everyday is an absolute struggle to stay alive. I urge all of you out there to do your research before you let anyone advise you to ingest a pill that may affect you and your general mood and thought patterns.

I wish everyone out their suffering from mental illness the best help possible.

Posted by
Molly
on August 13, 2014
Thanks for sharing. I took zyprexa too with bad effects. I was wondering how you are doing now. How are you doing physically now? Has your physical ability come back?