Just about everyone is familiar with Amazon.com, the world's biggest bookstore, and anyone who has read the news lately, including the LAS blog is also familiar with mistreated workers at its warehouse. "If the article [published in The Morning Call] is even half correct factually I think that Amazon is so wrong personally," says attorney Randall Brett, at The Law Office of Randall P. Brett, focusing on employment-related matters. "Legally, that is another matter…" 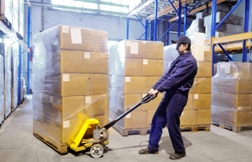 "I would argue that Amazon can be held liable, but it likely thinks ISS would be held responsible and claims would be made against ISS," says Brett, adding two caveats to his statement: "I've had no contact with Amazon or its employees or its suppliers and I don't specialize in Workers' Comp cases. Even if I did, the rules change state-to-state, but for the most part, laws that govern Workers' Comp stay the same, from Pennsylvania to California…

"Although some states might have some pertinent rules that can affect an employee, most specific to this Amazon issue, and germane to any employment discussion regarding ISS and Amazon is this: It appears from recent press that the company is looking to offload its employment-related responsibility to ISS. It isn't unusual to use a third-party firm as an employment agency. However, here in New Jersey where I practice, such a case would probably create a co-employment situation where, under certain circumstances and based on some facts in the matter, Amazon might not be able to get away with offloading."

Brett said some states are more liberal than others. California is more employee-centric than any other state, as is New Jersey and Pennsylvania, home of Amazon, a pro-labor and pro-employee state. But nationwide, co-employment may subject Amazon to some workers' protection issues that it is trying to offload to ISS. "Amazon may think that ISS will screen them from Workers' Comp claims, but that may not be the case," says Brett.

Regardless whether an employee is temporary (as are Amazon's warehouse employees) or permanent, whether you work one hour or one day, you are still protected under the Workers' Compensation laws. "I'm not sure what PA has so far as mandated benefits, but there is a formula here in NJ in calculating what an employee is owed in case of injury," explains Brett, "so Amazon employees would be entitled to medical expense, and if they suffered long-term health issues, they may be eligible for long-term benefits or a cash settlement.

"For example, in NJ if you lose a hand, you are entitled to a certain amount of dollars, hence 'giving you an arm and a leg,' which term literally comes from insurance settlements. In the case of Amazon's home turf, in general terms their system will provide for some kind of compensation beyond medical expenses, but the burden is on the employee to show they have a long-term med condition exacerbated by the working condition."

Brett argues that Amazon would be on the hook, given the close ties with ISS as conveyed in The Morning Call’s article. "I would say that Amazon controls the working conditions, the environment and the discipline, in other words they determine who gets fired and who gets hired," he says. "Based on what the author presented in the Morning Call article, I think a strong case could be made that there is a co-employment situation, so Amazon is as responsible for coverage, as is ISS.

Amazon, like a number of third-party employers, use companies such as ISS for a number of services such as payroll, and companies do so for a number of reasons. Amazon is paying contributions toward Workers' Comp premiums that are charged to ISS, but at this point, who knows how the deal is structured?

"These third-party agreements can be structured in a number of ways," says Brett. "For example, Amazon may be looking for ISS to pay the first dollar on claims and ISS may have an insurance policy, which is probably the way it is set up. Amazon could have agreed to absorb the first amount of claims, say $100,000 in the first year and the rest is offloaded to ISS. These deals are structured as a basic cost to the employer—the employer wants to have a fixed cost. So ISS bears the responsibility of hiring, record-keeping and statutory benefits like Workers' Comp and Unemployment Comp."

How does Amazon benefit from keeping most of its employees temporary rather than permanent?

More WORKERS' COMP News
"If I am correct, Amazon believes it can limit its costly benefits to 'permanent' employees and deny such benefits to temporary workers provided by ISS. Amazon would also be protected from having to honor employee claims for such federally mandated benefits as leave under the Family and Medical Leave Act. For example, an employee who is hired by Amazon.com directly after working a year for ISS would not be eligible for leave under FMLA until having worked for another year for Amazon. In other words, no credit would be given for the time worked for ISS in essentially the same job and for the same company.

"So under the theory that ISS is simply a fig leaf and Amazon should be considered the employer, that could open up a whole host of problems for Amazon," Brett reiterates, adding that the "Workers' Comp issue may be just the tip of the iceberg for Amazon."

It will be interesting to see where the claims—if any—will fall: Amazon or ISS?