Duality Observed in Illinois Cause for Confusion, but Plaintiff Benefits Nonetheless

A unique Illinois Workers Compensation lawsuit has been quietly percolating through the courts of Illinois. At stake are two claims for workers compensation benefits filed by a personal assistant for an individual with disabilities. At the heart of the Illinois denied workers compensation claim, is an interpretation under Illinois law as to who is, or is not an employee of the state. 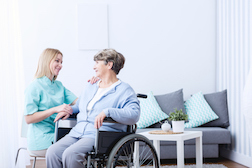 Thus, personal assistants in the state of Illinois are on a dual track: they are directly employed by the individual client, yet benefit from classification as a state employee for collective bargaining and wages.

It’s a duality that both serves as a benefit, and a source of confusion as one Illinois workers comp lawsuit aptly demonstrates.

Plaintiff Stephanie Yencer-Price is a personal assistant employed by an individual with disabilities in the State of Illinois. On two occasions she alleged to have sustained injuries while working in that role, and filed two workers compensation claims against the Illinois Department of Central Management Services (CMS), the State agency which provides and coordinates personal assistant care to clients under the Illinois Rehabilitation Act.

The plaintiff filed her Illinois workers compensation claims as a state employee. CMS however, determined in its response that Yencer-Price was not a state employee and thus did not qualify for benefits, issuing an Illinois Denied Workers Comp Claim decision.

However, there was more brewing than a simple denial of benefits, given that the Office of the Attorney General for the State of Illinois refused, during proceedings before the Illinois Workers’ Compensation Commission, to argue that Yencer-Price was not a state employee.

In response, CMS litigated to prevent the office of the Illinois Attorney General from representing CMS in Yencer-Price’s Illinois workers comp benefits application, and sought to have a special counsel appointed to supersede the State Attorney General.

Their request was denied. On appeal, CMS argued that the Office of the Attorney General for the State of Illinois was overstepping the Attorney General’s constitutional separation of powers, and cited prior case law in Harris v. Quinn, a case that appeared before the US Supreme Court in the summer of 2014.

However, the appellate panel sided with the lower court and determined that the Attorney General for Illinois indeed had the authority, and was the most appropriate agent to represent CMS in the workers compensation claim.

More LL WORKERS COMPENSATION News
“We acknowledge CMS’s argument that it has presented a ‘colorable’ claim that personal assistants are not state employees based on the United States Supreme Court’s ruling in Harris [v. Quinn],” Justice Lisa Holder White wrote in her written opinion on behalf of the appellate panel. “However, we agree with the attorney general that the Supreme Court found the personal assistants were not ‘full-fledged’ state employees in the context of federal first amendment claims. The Supreme Court specifically stated its ruling was not based on state law. Additionally, we do not think that decision has any bearing on whether a conflict of interest exists such that the attorney general should be disqualified in this case.”

The Illinois Denied Workers’ Comp claim is Hoffman v. Madigan, Case No. 4-16-0392, in the Appellate Court of Illinois, Fourth District.

If you or a loved one have suffered losses in this case, please click the link below and your complaint will be sent to a workers compensation lawyer who may evaluate your lL Workers Compensation claim at no cost or obligation.
Request Legal Help Now