What You Should Know About Denied Disability: Washington Disability Attorney Weighs In

Disability attorney Chris Roy has won a lot more Washington denied disability cases than he has lost because he evaluates individual cases and only takes those he believes the client will win. 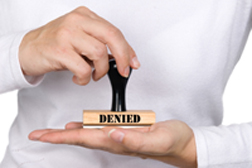 Most of Roy’s clients seek his help after they have been denied long term disability. “I think it is more likely they wouldn’t be denied disability with the help of an attorney, but in most situations I recommend they try it themselves first,” says Roy. However, wrongly denied disability spells delay.

Roy says that if you can afford to “go it alone” and you are successful, that’s great. But it’s a gamble: the appeals process (overturning a denial) could take up to a year so hiring an attorney from the “‘get-go” is a good idea if you can’t wait that long. But it also comes at a cost. If you weigh the cost of waiting for compensation against the legal cost and decide on the latter, an experienced disability lawyer can evaluate your case and recommend how to proceed - or not.

“If your long term disability claim is denied, seek help with your first appeal - this is crucial,” says Roy. “Even if you are denied the first appeal, you have the right to file a Washington Long term denied disability lawsuit but you cannot introduce new evidence at trial.” Remember, you cannot take the stand in court, so it is so important that you don’t forget anything. The court will look at everything your insurance company has in its file and determine whether your insurer made the right decision in denying your claim.

Mistakes people make without an attorney

One crucial piece of evidence is your doctor’s CV or resume. It shows your doctor’s credentials, particularly if they specialize in a certain field such as neurology. People don’t think to submit that on their own. There is often an argument about medical opinion and if you are able to show the court that your doctor is an expert rather than the insurance company’s Independent Medical Examiner (IME), that ball is in your court.

People don’t often submit a personal statement explaining who they are, or how they were before their disability affected their life. A personal statement is a way for that person to give testimony. “I can weave their statement into my argument; it is the only way they can really tell their story,” says Roy.

No objective evidence of disability
This is the most common reason for denial. Your symptoms are self-reported, and you have no clinical examination to prove disability, even if your doctor says you are disabled. Take fibromyalgia, Chronic Fatigue Syndrome and many neurological disorders, for instance. Your doctor would just send a note to the insurer explaining your disability and he believes this is sufficient. But it’s like David and Goliath - his note is up against the insurance company. There is an entire body of law that says you cannot require objective evidence for illnesses that cannot be proven through objective testing, such as pain and fatigue and other disabling symptoms.

“Here in the 9th circuit the insurance companies have to give credibility to these subjective reports of pain and fatigue,” says Roy. “Although insurance companies will deny, it is up to the attorney during the appeals process to show them the law. You cannot deny a claim based on no objective evidence of disability, but insurers do it all the time.”

Pre-existing condition
In a recent case, an individual was prescribed vitamin supplements for their medical problem. The insurance company denied disability on the grounds that they had been previously treated for this illness. His doctor prescribed vitamins before his insurance coverage began.

For example, your coverage begins January 1, 2014. Your policy says that if you claim disability within the first year, the insurance company can look back three months from your date of coverage to see if you received any treatment or medical attention for that issue.

If you have been insured for longer than 12 months and you claim disability in January 2015, the pre-existing exclusion of the policy would not apply.

The IME versus your doctor
Roy says that you will be asked by your insurance company to see its Independent Medical Reviewer (IMR), who may conclude that you are not disabled. This decision will be based on a pure paper review of the medical evidence, and what they believe is a typical situation: you wouldn’t have these symptoms by now or they would have improved by now. And they determine your functional limitations, typically based on no evidence.

If you have been collecting LTD for two years, the insurance company changes its strategy when the policy’s definition of disability changes from “own occupation” to “any occupation.” Your disability has prevented you from working at your specific occupation but now they look at any occupation they believe you can work at, as long as the income is similar to what you were making before. They will say that a person in your situation has these functional limitations and they will present you with a list of jobs you can do.

Roy adds that there are a lot of variations on these themes. Unum, or Unum Provident is notorious for this bad faith practice: they will hire a doctor or nurse - the IME - to perform a medical review and withhold information from that medical authority. In those situations, the IME comes up with a faulty opinion based on missing or false information. Then the insurance company uses that opinion as the authority on which to base its denial.

Are you disabled from your own occupation? The insurance company will make an allegation and not look at your specific job. Say you are a registered nurse and cannot stand or walk for any length of time. They will look at the general economy and reference some standard in your field. “The insurance company references the Dictionary of Occupational Titles and defines a nurse’s job. They will find that an intake nurse works at a desk, therefore find a job as an intake nurse. Or a school nurse. But the law is clear: the insurance company has to consider the job requirements of your specific job, and not just some hypothetical “normal” job requirements.

Roy recently won a case for a registered nurse who was denied Washington long term disability.

“I was able to read and understand her policy and cite specific clauses that supported her positions,” he says. “The insurance company denied her claim because she hadn’t been seeing her doctor on a regular basis. However, her policy just said she had to be under ‘appropriate care,’ meaning that she was only required to follow her doctor’s medical advice.

“Her doctor said that my client was in pain management mode and to see him only to manage pain and continue with physical therapy. I was able to show that she was under appropriate care.

“According to the insurer, a person in her position would seek more medical attention,” says Roy. “She was in a lot of back pain and it could only be explained by recent foot surgery. They argued that she should have recovered by now and should not be exhibiting these problems. She was finally diagnosed with levator myalgia - a pelvic floor dysfunction - pray you never get that. It can be brought on by a foot issue and a cascade of events, which I was able to articulate and explain the causal relationship between the foot and this disability.”

More WASHINGTON DENIED DISABILITY News
This is a typical example of how an attorney can win your case. You may not be able to read “legalese” and define terms elsewhere in the contract that may require looking at 30 pages of fine print.

Unfortunately, many people in pain give up when they have been denied what is rightfully theirs. To the insurance company, it’s a numbers game - they count on its policyholders giving up and not hiring an attorney to help with their appeals process. And that is why companies like Unum and Cigna make millions of dollars - they take profit over people.

Click to learn more about LawyersandSettlements.com
LawyersandSettlements.com - A trusted, independent legal news provider bringing quality news and information on legal cases and lawsuits filed in the United States of America to its readers since 2002. Over 650,000 legal help requests including Insurance Cases, Consumer Frauds, and Drugs & Medical Cases have been forwarded to lawyers all across to the country.