"I have six kids and cannot risk their health on a product such as Totino's pizza and General Mills inability to inform the public of a recall in a timely manner," says Tracy S. "As a mother I have placed my children in danger every time I cooked a pizza for them and fed them this deadly bacteria, E. coli."

Tracy and three of her children ate four Totino Supreme and pepperoni pizzas on Halloween night. Tracy ate three-quarters of one pizza. Fortunately, her five-year-old daughter and six-year-old son ate less than two slices each. Otherwise, they would likely have been as sick, or worse, than their mum.

"Early Friday morning I woke up with severe stomach cramps and I felt absolutely horrible," says Tracy. "I had extreme fatigue and felt like I had to go to the bathroom. I was in the bathroom for at least 30 minutes but nothing happened - just cramping. I had to get up and function; my kids had to get ready for school. Luckily, my little ones didn't complain of cramps—just diarrhea and very stinky gas. 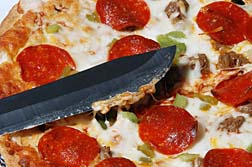 It didn't occur to me that I had food poisoning—I thought it was just a virus. On Saturday I had to take my daughter to soccer and it was agony. I didn't know that you aren't supposed to take Immodium if you have Ecoli. I took it. It made me feel better for a little while but the cramps came back.

On Monday morning, I was going through my email. A friend in Georgia forwarded me the recall notification—she sent it to everyone she knew; it is just something we do, looking out for each other. I read it and immediately went to my trash can, dug out the pizza boxes and looked up the SKU numbers. They matched, they were on the recall. I kept the boxes and I also have plastic wrap in my deep-freeze that has cheese and pepperoni on it. I am prepared.

Then I went to the doctor. He said the more you consume, the sicker you get, which explains why my kids didn't get as sick as me. He didn't know about the recall either. Nobody did. It was on the news but nobody I talked to knew about it. The information I gathered was that the cases of Ecoli were in the mid-west, and I am in California. I was livid. I felt bad because I fed my kids these pizzas and the company knew since July that their pizzas were contaminated with Ecoli. These pizzas from the recall batch were still being sold and shipped nationwide. How dare they do that?

More News
What upset me the most was that General Mills knew and didn't pull the pizzas off the shelves sooner. Apparently they knew about the outbreak in June or July and we were sick months later. I had my kids tested and the results came back negative, thank God. My tests came back negative as well and I can't understand that. I was so classically symptomatic of this Ecoli, from the onset to the decline. I had a fecal test and a test to find out if there is blood in your stool. Apparently your lab has to make sure the test is performed on a special kind of paper. Perhaps they weren't careful enough...
It is probably too late to get another test but I do have some pepperoni pieces on the partial piece of pizza that is sitting in the freezer. I don't have the finances to get any testing done. It is frustrating."

Posted by
Greg Talpas
on January 21, 2019
I ate a Totino's party pizza last night. Within an hour or so my stomach started hurting then shortly there after diarrhea started. Horrible stomach pain and burning, diarrhea constantly. Lasted all night, now almost 24 hrs later, I still feel horrible