Diane Baines didn't know about General Mills' Totino's and Jeno frozen pizza recall until one of the girls at work mentioned it.. One month earlier, her disabled daughter was fighting for her life in hospital after they both ate Totino's pizzas contaminated with E. coli.

When her co-worker told her about the recall, Diane Baines (not her real name) got to thinking about the time that she and her daughter Christine decided to take Diane's mom out to dinner, back in August. Her daughter, Christine, slept over at a friend's house that night. About 5 am, Diane got a call from her daughter's girlfriend, telling her that Christine was really sick. "Although Christine is 22 years old, she had a lung removed when she was an infant so I have to watch her like a hawk," says Diane. "I panicked and told them to take her directly to the ER...

"I was right behind them. Christine was vomiting and had severe diarrhea. Every time she gets sick it is a very big deal; she has been in and out of hospital all her life. Naturally, I thought it was a respiratory problem—I always think this when she gets sick: it could kill her. 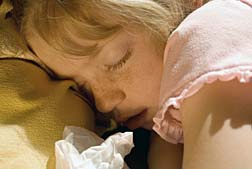 They started giving her drugs to stop the nausea and she was admitted. Four hours later I was sitting by her bedside and I got sick. I went home and started vomiting then got diarrhea as well—I was so sick that I called an ambulance.

I told the doctors in ER that it was rather coincidental that my daughter had been admitted just hours earlier; they admitted me right away upon hearing that. The next day I was talking to my daughter (we had rooms next to each other and I have worked at this hospital for 17 years) and we went over the food we ate at the restaurant. At lunchtime we had two Totino's pizzas—one each (she eats them all the time).

At this point, the doctor said, 'You could very well have food poisoning but we don't know, it will just have to run its course.' Another doctor told me there are so many tests to check for food poisoning. The second day in hospital, I insisted that they take a stool sample. But I had been on a full day of antibiotics so E. coli wasn't detected. It came back negative. They never tested my daughter because she was on stronger meds.

We didn't think anymore about it - just figured it was something we ate at the restaurant. We were in the hospital for two days on IV and antibiotics. I was really concerned about Christine. I was sure I had food poisoning but my mom didn't get sick and she went to the restaurant.

I went back to work the following Monday. About one month later, I heard about the recall from my co-worker (who also cleans my mother's house). She told me that there was the recalled Totino's frozen pizza in my mom's freezer. I also had Totino's pizza in my freezer and it is still there! I immediately went on the internet and saw that the recalled pizza was the same that we ate--pepperoni.

My mum didn't get sick because she had recently moved into a nursing home—that might have saved her life, otherwise she might have eaten those pizzas in her freezer.

When I found out about the recall, I was pretty upset. I have fought all my life to keep my daughter alive and I was furious that something she ate could take her life. It seemed like nobody understood or cared about that. I was so mad because food poisoning so often goes undetected—most people think it is the flu. But there are so many cases of deaths each year and no one is held responsible. If you knew her history and how hard I struggled - why can't this be prevented?

We will probably eat a frozen pizza again but it won't be from General Mills and it won't be pepperoni."