"General Mills Totino's and Jeno's pizza E.coli outbreak is a relatively small outbreak in relationship to others," says food poisoning lawyer Bill Marler. " Therefore, wage loss and medical bills would be a small amount of money to pay for goodwill in this case." Although small by outbreak standards, the [frozen pizza recall ] sent many consumers to hospital.

Other companies in the past have done well to make restitution--those that step up to the plate and reassert their desire to make food safety their utmost priority and take care of their customers will likely keep their customers.

Marler cites Jack in the box and Odwalla Beverages, (both e coli) Chi-Chis Mexican restaurant chain (hepatitis A outbreak) and Sheetz chain of stores (salmonella) as examples. All these companies paid medical expenses to their customers sickened by outbreaks caused by their product. "Even companies like ConAgra have made the same offer, both in peanut butter and pot pie litigation," adds Marler. 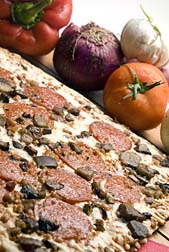 "Stepping up and dealing with these issues, such as wage loss and medical bills, doesn't mean the company won't get sued, because some people may have medical bills that are not yet known," he says. "However, for the most part, when companies do take care of their customers, many never file a lawsuit at all."

Sounds like a win-win situation, with the exception of the plaintiff's lawyer. "Well, the plaintiff's loser does lose out in some respects but that isn't necessarily a bad thing," explains Marler. "We want to do what is in the client's best interest; if General Mills pays the medical bills, it is a positive step."

Marler also points out that a company responsible for an outbreak should pay bills only to those they know for a fact were sickened by that company's product. That can be determined either by a stool culture or proof of purchase because paying non- legitimate claims doesn't benefit anyone. "We spend a lot of time making sure the claims we bring forward are in fact provable --we turn a lot of people away."

Substantial proof that you were sickened by bacteria is almost a combination of factors: if you have medical records and proof of purchase, you don't need to have been diagnosed with having contracted E. coli, but have symptoms consistent with the bacteria. (Many victims are placed on antibiotics right away; even if they do have E.coli, a stool test done later could likely be negative.) For instance, the symptoms of E. coli usually are bloody diarrhea and not a high fever. Hepatitis A has an incubation period of two weeks; E.coli is usually three to four days while Salmonella is 6-72 hours. " We look at the symptoms and see if they are consistent with that particular bacteria," says Marler.

"The pushback you get from food companies or their lawyers is that they won't pay victims' medical bills because it appears they are admitting guilt," Marler points out. "The company should only be paying medical bills from the people it poisoned. So it doesn't matter if it is admitting guilt on claims that it is in fact guilty of!

More News
"The other point is that, in most jurisdictions, they do not allow the admission of the fact that you paid someone's medical bills as evidence of guilt. Even though the company does not pay, I cannot admit that in court to prove the company is at fault. The company has nothing to lose; in fact some would argue that it has everything to win because the defendant is able to present evidence to the jury that they stepped up and paid their customers' medical bills - that is a good spot for the defendant to find itself."

As for this pizza outbreak, the jury is still out regarding how and when the pizza was contaminated. "The evidence isn't clear as to what component part was contaminated but we do know that some of the pizzas were contaminated. And we don't know how—yet," says Marler. "But it will be figured out."

LawyersandSettlements called Tom Forsyth, spokesperson for General Mills regarding their pizza outbreak. He declined to speak with us.