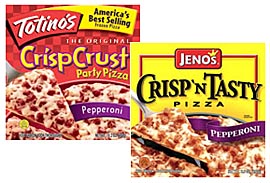 At least 21 people have contracted the same E. coli 0157:H7 strain linked to the General Mills Jeno's and Totino's frozen meat pizzas, and nine of those victims have reported eating the E. coli-tainted pizzas prior to becoming ill.

Each package also bears the establishment number "EST. 7750" inside the USDA mark of inspection as well as a "best if used by" date on or before "02 APR 08 WS. The frozen meat pizza products subject to recall were produced on or before Oct. 30 and were distributed to retail establishments nationwide. The problem was discovered following an investigation carried out by the Tennessee Department of Health in coordination with the CDCP into a multi-state cluster of E. coli O157:H7 illnesses that may be linked to this product.

The specific products in the recall include:

Pizza Recall: General Mills Can Afford Victims' Medical Bills
Michael B. and his fiancée both wound up in the hospital after eating Totino's pizza. And they got sick after the Totino's and Jeno's E. coli pizza recall. Michael bought 10 pizzas on December 4th; luckily he kept the receipt and the pizza boxes that matched General Mills recalled SKUs (stock keeping units or UPC codes).

Recall? What Totino-Jeno Pizza Recall?
Diane Baines didn't know about General Mills' Totino's and Jeno frozen pizza recall until one of the girls at work mentioned it.. One month earlier, her disabled daughter was fighting for her life in hospital after they both ate Totino's pizzas contaminated with E. coli.

Pizza Recall Injuries Extend Beyond Poisoning
For some people, the recent General Mills Pizza recall was nothing out of the ordinary. They may have felt a little ill and not even realized that they were sickened by eating E. coli contaminated pizza. For others, however, the E. coli outbreak was a lot more serious. Some people were hospitalized because their symptoms were so severe and at least a few patients have developed a more serious kidney problem after being exposed to E. coli.

DEC-16-07: General Mills has changed the label of its Totino's and Jeno's pizza in the wake of the pizza E. coli recall. The pizzas will now carry instructions that they are not to be microwaved. [USA TODAY: PIZZA RECALL]

NOV-15-07: State and federal authorities discovered possible contamination of Totino's or Jeno's frozen pizza while investigating reported cases of E.coli. The problem is believed to have come from pepperoni topping at the General Mills plant in Ohio. [SIDELINES: PIZZA E.COLI]

NOV-13-07: Anonymous USDA meat inspectors have revealed that it is deemed acceptable to sell beef that has tested positive for E.coli, as long as it is kept separate from the uncontaminated meat during processing and pre-cooked to kill the bacteria before selling. [TRIBUNE: PIZZA E.COLI]

NOV-07-07: General Mills says it is recalling around five million frozen pizzas because of an e. coli outbreak that has affected 21 people in 10 states. [KFVS: FROZEN PIZZA]

NOV-1-07: General Mills has issued a recall of 414,000 cases of frozen pizzas due to possible E.coli contamination. Consumers are urged to check their freezers for Totino's and Jeno's pizza products with pepperoni topping. [REUTERS: PIZZA E.COLI]

If you or a loved one has suffered damages in this meat pizza E. coli case, please click the link below to send your complaint to a lawyer to evaluate your claim at no cost or obligation.
Please click here for a free evaluation of your claim
Last updated on Dec-30-07

"General Mills Totino's and Jeno's pizza E.coli outbreak is a relatively small outbreak in relationship to others," says food poisoning lawyer Bill Marler. " Therefore, wage loss and medical bills would be a small amount of money to pay for goodwill in this case." Although small by outbreak standards, the [frozen pizza recall ] sent many consumers to hospital.READ MORE
Recall? What Totino-Jeno Pizza Recall?

Diane Baines didn't know about General Mills' Totino's and Jeno frozen pizza recall until one of the girls at work mentioned it.. One month earlier, her disabled daughter was fighting for her life in hospital after they both ate Totino's pizzas contaminated with E. coli.READ MORE

Posted by
Kentucky
on December 29, 2007
My child was born at 23 weeks and 6 days gestation due to e-coli that I had which eventually infected my placenta (accoding to lab results). My son is now in the NICU at UK Hospital in Lexington, Kentucky. He is on a breathing machine and willl likely be in the hospital until March. I have the reciepts for the pizzas we purchased from our local Kroger in mid - late October. The most recent pizza I ate was Canadian Style Bacon and Pepperoni.
Posted by
Oregon
on December 9, 2007
After my Fiancee and I ate two Totino's pizzas bought at Fred Meyer we became ill. I had minor digestive problems, she has such severe digestive problems that we had to go to the ER. She was there for 6 hours, they took blood and other samples, and intend to contact us when they can confirm E. Coli very soon. She does not have Medical insurance, and we are unable to pay the medical fees for treatment. Please help us!
Posted by
Texas
on December 7, 2007
My 2 and 3 year old are too young to complain about stomach cramps, but both suffered diahrrea, fever and crankiness. After my husband and I heard of the recall, we were very concerned about them and took them to our doctor for E.Coli testing, but we did not know that our insurance company would apply all of the lab testing to our deductible which was $252 for each child, plus $22.65 for each co-pay for the doctor's visit.
Posted by
Texas
on November 27, 2007
My son and I had to be taken to the emergency room because of violent vomiting and diarrhea. A few days later we saw on the news that pizza's were being recalled. I checked our freezer and realized all the pizza's we had were the ones that were being recalled and my son and I had eaten one the night we got sick. I contacted General Mills, gave them all of the information, and was told someone would be contacting me. It has now been over a month, and I contacted them again to speak with someone, but no luck. Meanwhile, I have a 3,000 dollar emergency room bill, not to mention the 4 days of lost work because of the sickness.