On November 1, General Mills recalled over 400,000 Totino's and Jeno's pizzas due to possible E. coli contamination. Several [lawsuits]were subsequently filed against General Mills on behalf of victims who demand that the giant food distributor pay their medical expenses. "Tasha, my fiancée, got sick first, about two days after we ate a few of the pepperoni pizzas," says Michael.

"We thought it was food poisoning right away," he says. "Then Tasha's brother called (after I told him she went to the hospital) and told us about the pizza recall. At first Tasha just had nausea but the next day her temperature was fluctuating between 94˚ F to 100˚ F and she had diarrhea. I took her to ER and we waited and waited—Tasha doesn't have any medical insurance. When she was finally seen by a doctor, they put her on IV because she was so dehydrated. That was all they could do for her, along with anti-nausea meds. 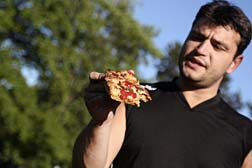 I think they discharged her too early because she was really sick up until just a few days ago. A day or two later I got the exact same symptoms. I had medical insurance so I went straight to ER and they also put me on IV. But they gave me three bags (she got one bag) along with anti-nausea meds and antibiotics. They also did the usual tests but nobody was willing to say it was E.coli-the doctors just said that we had gastro-intestinal problems.

We did some research and the numbers on the boxes matched the recall--according to the General Mills website. The next day I went back to the Fred Meyer grocery store and talked to the on-duty manager. I showed him the empty pizza box and he confirmed that they did know about the recall and they pulled all Totino's and Jeno's pizzas from the shelves.

'That couldn't be true', I said. I had the box in my hand and had the receipt with the date of purchase—several weeks after the recall.

'Maybe the ones you bought had been stored in the back warehouse and not taken back as part of the recall,' he said, ' and someone restocked the shelf.'

That was pretty feeble. He wasn't even going to reimburse the full amount of the pizza cost. Instead, he told me that I had to bring back all the pizzas on the receipt to get a refund—I had bought 10 boxes on that receipt but only two were on the recall list.

Recalled or not, we had lost our appetites for Totino's pizza. We didn't go back to Fred Meyer either.

More News
It is too coincidental that both of us got so sick a few days after eating the pepperoni pizza. We didn't go to any restaurants or eat any other fast food at that time. Although we are both better, we both have busy lives so it is difficult to figure out what to do next. But I am holding on to the pizza boxes and my receipt as evidence.

Ironically, most people who buy these pizzas tend to be in a lower income bracket and often do not have medical insurance. We are hoping that General Mills will at least pay for Tasha's medical bills-they are in excess of $600."

General Mills reported that its revenue was up seven percent to $3.7 billion from $3.47 billion a year earlier. It also said its second-quarter profit was up, as growth in its snacks division offset higher ingredient costs and charges from the pizza recall.