General Mills produced and distributed 120 million pizzas throughout the US during an E. coli outbreak that was linked to the company's Totino's and Jeno's pizzas. However, although the company did announce a recall, it only involved 5 million of those 120 pizzas produced.

Considering that General Mills, the sixth largest food company in the world, has revenues for 2007 estimated at almost $12,500,000,000, recalling the other 115 million won't bankrupt the company. And it can also afford to pay medical costs
for E.coli victims, many of whom do not have insurance.

During the time of the outbreak—from July 20th to October 10th—21 people were reportedly sickened wit h E coli. Countless more people who ate even one slice of pizza could have been sick with this deadly bacteria because most food poisoning cases are unreported. 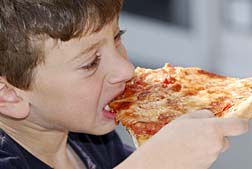 Seattle lawyer Bill Marler represents victims of E.coli outbreaks. He is outraged that General Mills hasn't expanded its recall to include all pizzas produced during the recent outbreak and is calling on General Mills to "do the right thing".

"Without assistance in the form of monetary compensation for medical expenses, many of the families with members who were hospitalized will face financial hardship in the coming months when the bills start coming in," said Marler. "General Mills knows it's going to pay those medical expenses in the end in the form of a settlement or jury verdict," Marler continued. "The question is, since they know their product was the cause of these illnesses, why wait?"

More News
"My daughter has a severe disability and E. coli just about killed her," says Debbie Jones (not her real name pending a lawsuit). Her daughter only has 29 percent lung capacity; luckily she was rushed to hospital in time and treatment was administered immediately. Two hours later, Debbie was also admitted—they had both eaten Totino's pizza. "I was fearing for my daughter's life but I was in another room at ER and couldn't do anything to help her. She has a long medical history and this was the last thing she needed. We were both sick for days and have huge medical bills because of General Mills pizza..." Victims like Debbie Jones can't afford to wait for General Mills to decide when they are going to pay victims' medical bills; her family, and countless others, should be compensated now.

Companies such as Dole, Odwalla, ConAgra and Jack in the Box did the right thing and paid medical expenses when their products were linked to E. coli outbreaks. Why can't General Mills?