On June 7, 2008 Attorney Peter Williamson and Co-counsel John Burton were successful in obtaining the first products liability verdict against TASER International in the history of the company as a result of the wrongful Taser death of Robert Heston. They successfully convinced a jury that the weapon manufacturer knew or should have known about the potential risks of its M26 model due to multiple and prolonged discharges but failed to warn about such risks--such as being tasered to death. 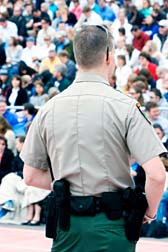 "I originally got involved with the litigation against TASER, International when John Burton, a friend and colleague (we had worked together on civil rights cases) asked me to assist him in representing Mrs. Evelyn Rosa, whose son had been shocked with a TASER during an encounter with the Seaside California Police Department resulting in his death," says Williamson. Shortly after being retained in the Rosa case, the Heston family was contacted by Mrs. Rosa--she had read about Robert Heston's death after being shocked multiple times with a TASER-- and the two families connected.


Building the Case against TASER International

Williamson explains that the Heston case presented daunting challenges because it combined complex civil rights issues with those of a more typical products liability case against TASER, the largest stun-gun maker in the world. TASER also let it be known that it would use all of its resources to aggressively fight every product liability lawsuit filed against it. Over the course of 3 years of very intensive litigation, Williamson and Burton spent considerable time and money learning everything they could about the TASER including how it works, its electrical output and the training involved in its use. Most importantly, all of the peer-reviewed research conducted on the physiological effects of the TASER was gathered, reviewed and analyzed. They also learned how to interpret data obtained from the TASER Dataport, a computer chip included with each TASER that is designed to record every discharge of the device, (Unlike countless police officers, Williamson and Burton didn't feel the need to Taser themselves.) For example, by looking at the Dataport in the Heston case, Williamson and Burton were able to determine and ultimately prove at trial that the officers involved in attempting to restrain Heston discharged there TASERS almost continuously for 64-seconds.

"At the same time, we began to obtain and study very carefully all the peer-reviewed research that was available regarding the physiological effects of TASER discharges. Initially we focused on the claim that TASERS directly stimulate the heart causing an electrical disruption of the heart rhythm resulting in cardiac arrest. But, the more we studied the research available, the more we began to suspect a different cause to explain Robert Heston's death. Our theory was simple. TASERS cause severe muscle contractions which produce lactic acid in the blood. As the acid level rises in the blood, ph drops. It is well known that ph plays a principal role in controlling the electrical conductivity of the heart. Rapid drops in ph that fall below .70 are considered lethal and can trigger cardiac arrest. In Mr. Heston's case, his ph was measured at .67 shortly after being tased by the police officers.

Robert Heston and Events Leading to his Death

Robert Heston was a single 40-year-old who had, for approximately 20 years, a serious addiction to various drugs, most notably methamphetamine. He had been in and out of rehab but was unable to successfully kick his addiction. Heston had spent some time in local county jails after getting into several altercations with police while 'under the influence'. And he was the stereotypical drug addict—well liked and hard-working with strong family ties during periods of sobriety.

About one and one-half years before his death, Mr. Heston was sentenced to prison for the first time after violating his probation. He was released on parole 3 weeks before his death. Heston seemed to be doing fine for a few weeks but then reverted back to his pattern of abusing drugs. His parents observed erratic behavior (he was living with parents) the night before the incident. The next morning, Heston's father noticed bizarre and delusional behavior. He called the police and asked them to remove his son from the house so that he could obtain help for his addiction. After they arrived at the Heston home, the police tried to engage Heston in conversation but felt they couldn't do anything—he wasn't committing a crime (they decided not to take him into custody) so they left. Minutes later, Robert began to throw some furniture and other items outside the house; he smashed a window and started to turn his parent's home upside down.

The police returned and by this time a few other witnesses had arrived. Two officers fired TASERS at Heston; one missed but the other officer hit him but admitted that it was fired at nearly maximum range (just over 20 feet); Heston fell backwards but the Taser didn't seem to affect him possibly due to the wires being pulled out of his body. He started to throw more items around. A second wave of officers arrived and fired their TASERS; he staggered and fell to the ground on his chest with his arms underneath his body—a common position for recipients of TASER hits.

The officers continued to discharge their TASERS into Heston approximately 20-22 more times. The officers claimed Heston continued to resist their attempts to handcuff him by refusing to release his arms from underneath him. However, they also admitted that it was nearly impossible to handcuff an individual while he or she is being tased.

Within seconds of the final TASER discharge, it was observed that Heston's bald head "was turning blue." This condition is referred to as "cyanosis" meaning that Heston was experiencing a lack of oxygen flow in his blood. This condition suggested that Heston had already suffered a cardiac arrest – his heart had stopped supplying oxygen to his blood. Heston remained down for 13 minutes before paramedics arrived and were able to re-start his heart. However, because of the length of time his brain was deprived of oxygen, Heston essentially suffered brain death and never regained consciousness. His parents removed him from life support the following day and he died minutes later.

The Taser Trial
Our mission was twofold. The first contention we sought to prove was that the police used excessive force in violation of Robert Heston's constitutional rights--the Taser is designed to incapacitate an individual and take them to the ground creating a 'window of opportunity' allowing an apprehension team to handcuff the individual and take them into custody. We claimed that 20-23 TASER discharges after Heston was taken to the ground was excessive – in fact the excessive discharges were actually counter-productive to the officers' goal of handcuffing Heston while he was on the ground since it is nearly impossible to handcuff someone in the course of getting tasered."

Insofar as TASER was concerned, we claimed TASER International knew or should have known that multiple and prolonged TASER discharges pose a substantial risk of injury. In order to do this, we had to show a causal connection between the multiple TASER discharges and Mr. Heston's death. We then had to prove that despite TASER International's knowledge of the potential risks from the use of its devices; it failed to warn its users [the police] of those risks. In May, 2008, the case went to trial. After almost a month of trial, the jury concluded the officers should not be held liable because they had never been told by TASER International that there was any risk of injury from multiple and prolonged discharges. Quite the contrary, the police were told they could use the device as many times as necessary and that it would not result in injury.

More TASER DEATH News
However, the jury found the TASER did pose a potential risk of injury and that the company had failed to warn about it. The jury awarded to the parents of Mr. Heston $6 million: $1 million in compensatory damages and $5 million in punitive damages. They also awarded $223,000 to Mr. Heston's estate, $23,000 in compensatory damages and $200,000 in punitive damages. However, they found Robert Heston 85 percent at fault for his own death and Taser International 15 percent at fault. That means 85 percent of the compensatory damages only were reduced, resulting in a net total of $2,100 to the estate and $150,000 to the parents.

Right now we are involved in post-trial motions and TASER International has made it clear that it intends to appeal the verdict. But the judge concluded independently that there was substantial evidence for the jury to base its findings, which is very important for all future litigation against TASER International. Since the Heston verdict, we have been retained in a number of cases around the US and have consulted with counsel representing the family of Robert Dziekanski in the horrific Vancouver airport case."