More TASER DEATH News
A Mendocino County District Attorney (DA) has found that two law enforcement officers acted appropriately in a tragic incident in which a Ukiah man was inadvertently tasered to death. 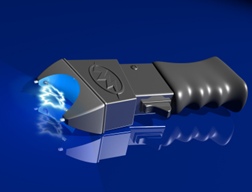 On October 12, 2009, a sheriff sergeant pulled to the side of the road to make a phone call when he noticed Christopher Belknap, a recent parolee, waving his arms in "an agitated manner," according to the Ukiah Daily Journal. Belknap allegedly attacked the officer when he emerged from his vehicle, landing several blows before the officer drew his Taser and subdued the suspect.

At this point a UPD officer arrived on the scene, drew his own Taser and fired on the attacker.

Belknap slipped out of consciousness while in police custody and died at a nearby hospital. A forensic autopsy determined that Belknap, who had a large quantity of methamphetamines in his system, died of sudden death due to an excited delirium. The death was ruled accidental.

Meredith Lintott, the DA investigating the incident, has closed the investigation, claiming that the two officers responded appropriately to the situation.

"The use of Tasers by a Mendocino County Sheriff's Sergeant and Ukiah Police Department Sergeant was a legally justifiable use of force against Christopher Belknap," she told the Press Democrat.

If you or a loved one have suffered losses in this case, please click the link below and your complaint will be sent to a personal injury lawyer who may evaluate your Taser Death claim at no cost or obligation.
Request Legal Help Now