A jury has ordered Taser International to pay $10 million to the family of 17-year-old Darryl Turner in a failure to warn suit after his heart stopped dead when police fired at his chest during a dispute with his employer at a grocery store in Charlotte, North Carolina, in 2008.
Read [ Taser International to Pay $10 Million for Failure to Warn ]

Taser Death Not an Issue in San Francisco

San Francisco is one of very few cities in the US where officers are not equipped with Taser stun guns. Police Chief George Gascon tried—unsuccessfully—to change that. According to the San Francisco Chronicle, the Police Commission voted last week not to allow police officers to carry Tasers.
Read [ Taser Death Not an Issue in San Francisco ] 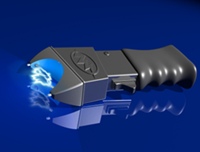 A Mendocino County District Attorney (DA) has found that two law enforcement officers acted appropriately in a tragic incident in which a Ukiah man was inadvertently tasered to death.
Read [ California Officers Cleared of Wrongdoing in Taser Death ]

Taser Death "Could Be Considered to Be Torture"

The Taser-related death of a 21-year-old man in January 2008 ended in the indictment of the Winnfield, Louisiana police officer who administered nine jolts to Baron "Scooter" Pikes—many of them while Pikes was handcuffed, and two after he was already unconscious.
Read [ Taser Death "Could Be Considered to Be Torture" ]

Yet Another Taser Death

Another senseless death by Taser occurred this past weekend; Nathan Vaughn's death was eerily similar to the Taser death of other men such as Robert Heston (February, 2005) and 24-year-old Keith Graff (October, 2005). All three men were Tasered over and over again and pronounced dead shortly thereafter.
Read [ Yet Another Taser Death ]

On December 12, the Crown announced that no charges would be laid against four RCMP officers in the Taser death of Robert Dziekanski. At the same time, the BC Criminal Justice Branch spokesperson disclosed that the Polish immigrant was Tasered 5 times and not twice as the RCMP initially reported.
Read [ Taser Death Cries Out for Public Inquiry ]

With the rising incidence of deaths by Tasers, a Canadian media network has commissioned an analysis of Tasers in an attempt to verify, or disprove their safety and reliability. The tests revealed problems with more than 10 percent of the devices tested, which were pulled from the stocks of US police forces at random and test-fired. Some didn't work at all, while others sent a current 50 percent higher than Taser said it would. Little wonder that Taser death is happening, given this latest development. An individual Tasered to death may very well have been hit with 50 percent more current, than recommended as 'safe.'
Read [ Ten Percent of Tasers Tested Found to Emit Higher Current ]

On June 7, 2008 Attorney Peter Williamson and Co-counsel John Burton were successful in obtaining the first products liability verdict against TASER International in the history of the company as a result of the wrongful Taser death of Robert Heston. They successfully convinced a jury that the weapon manufacturer knew or should have known about the potential risks of its M26 model due to multiple and prolonged discharges but failed to warn about such risks--such as being tasered to death.
Read [ Taser Death: Attorney discusses the first successful Verdict Against Taser International ]

Taser Death: 50,000 Volts to the Chest Akin to a Bullet to the Heart

The numbers of individuals who have been Tasered to death are growing, given the rise in the stun-gun's use by law enforcement. Taser death is all over the news, as tragic stories—most quite shocking and some downright appalling—report heartbreaking deaths by Tasers, and injuries suffered even by children.
Read [ Taser Death: 50,000 Volts to the Chest Akin to a Bullet to the Heart ]

Taser International is getting hit again, and this time the company may feel itself stunned. According to WESH NewsChannel 2, an Orlando attorney is filing 10 lawsuits on behalf of people who've been hit with Tasers, claiming that local police agencies' policies allowed for the overuse of Tasers by officers and agencies have failed to set clear guidelines on what qualifies as excessive Taser force. However, in other incidents, both police officers and the manufacturer must be held accountable for Taser Death.
Read [ Taser Death: Police Overuse a Lethal Weapon ]