"My Daughter Tried To Kill Herself"

Eunice has a beautiful, intelligent 19-year old daughter, Emily, who on the surface, appears to have it all together. She has a good job, and is currently going to college. But Emily has developed depression and suicidal thoughts, and she recently tried to kill herself. She is a chronic asthmatic who has been taking Singulair for approximately four years, and Eunice believes that Singulair may be responsible for Emily's psychological deterioration.

"When we lived in Florida my daughter was prescribed Singulair. Soon afterward she began complaining of leg pains, and she started crying all the time. When we moved to Maine in 2004 she was still on the medication and she still had these problems. It was just before her last year of high school her depression started, and she began cutting herself," Eunice said. 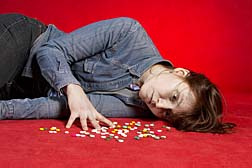 "My husband and I couldn't figure out why Emily was so depressed. She has both her parents, we had a good life in Florida, we have a good life here," Eunice said. "Of course being a teenager has its own issues. And, moving from Florida is a big change, and I thought maybe that was the problem," she said.

"When I heard about the side effects of Singulair on the news recently, I began doing my own research on the Internet. I found so many stories where people were complaining of the same symptoms my daughter had," Eunice said, including the depression. Just recently Emily told her mother 'I was crossing the street, and I thought 'what if I just let the car hit me?' "Why would you think something like that? I said. I was angry," Eunice said.

"But when I started reading other people's stories I thought - could it be the Singulair? The possibility that it might be her asthma medication never even crossed my mind because I hadn't heard anything about it." And nor had her doctors, apparently, because neither Eunice nor Emily were warned of any potentially deadly side effects.

"Then I read about a 15-year-old who had been on Singulair for three years and who was suffering from depression and had suicidal thoughts," Eunice said. "Emily was on the drug for a long-time - four years. I just feel this has something to do with her mood swings. So many kids are complaining of this. In fact, my cousin called me and told me she has retained an attorney because her son, who is eight years old, and has been on Singulair for two years, has been having nightmares, and his performance in school has completely deteriorated. He's only eight!"

Made by Merck, Singulair has been available in the United States for the treatment of asthma, allergic rhinitis, and exercise-induced asthma for 10-years. And it has been a very successful medication for the company. However, in October 2007, Merck updated the world-wide product label for Singulair to include warnings of 'suicidal thinking and behavior'. Additionally, changes were also made to the product information patients received. These changes were made based on reports Merck received of associated adverse events.

Then, on March 27, 2008, the Federal Food and Drug Administration (FDA) issued the following information on Singulair:
"...Healthcare professionals and caregivers should monitor patients taking Singulair for suicidality (suicidal thinking and behavior) and changes in behavior and mood."

More News
These warnings, however, were issued long after Emily had been prescribed Singulair —too late to have warned of the development of any related life altering side effects, such as depression. "Emily is always depressed. About a week ago she went to the hospital emergency and they gave her some antidepressants. Just today she tried to cut herself," Eunice said.

At the moment, Emily is not taking Singulair. But she is on a leave of absence from her job. And her parents are going to seek counselling for her. "My daughter wants people to know about this, about the potential for suicidal thoughts and depression she's experienced while taking Singulair," Eunice said. And Eunice plans to take the advice of her cousin and speak with an attorney, to see if anything can be done for Emily, and to help warn other people about the potentially life threatening adverse events associated with this asthma medication.