A Life Blown to Pieces by Singulair

Christine started taking Singular for her asthma in 2005. Within a year she became depressed and anxious, she lost her job, was hospitalized repeatedly, and declared bankruptcy. Only now, almost four years later, is Christine aware that the mood changes she experienced while taking Singulair could be directly responsible for the complete breakdown of her life.

"2005 was a horrible year, and I would never have put it down to an asthma pill. I stopped going to work, and I had landed a great job that year. My finances went down the drain— I ended up $40,000 in debt. I had to quit my job because the doctors said I was having a major depressive episode," Christine said. "I don't have a history of depression, or mental illness. But I was hospitalized 26 times in one year for anxiety and panic attacks, and in more than one state," she told Lawyers and Settlements. "I went broke," she said. 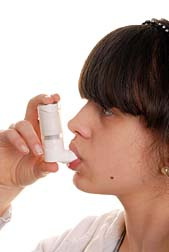 "And 2006 wasn't much better. "It was a blur - I hardly worked that year - just temporary work. I pretty much wasted that whole year. 2007 was the same, although I did enter a relationship at the end of that year. My partner said we had many arguments during that time," she said.

Christine's doctor had put her on 10 mg a day of Singulair, plus albuterol. "It worked very well in controlling my asthma. But my doctor didn't warn me about any side effects, especially anything related to depression," Christine said.

"I wasn't having suicidal thoughts as much as I was experiencing mood swings. I considered it but never attempted it," she said. Christine's depression and anxiety seriously impacted not just her but also those around her. "I've been working since I was 15 years old - I've always had a job," she said. "My inability to work affected not only my life but also my parents' life - they took out a loan to pay off the debt. And my partner took out a loan to get rid of the rest of my debt. It affected a lot of people. I lost a lot of friends during that time as well," she said. " I used to be happy- go-lucky."

How did this nightmare finally come to an end? In March 2007, Christine's mother called to warn her - she had just heard that Singulair was causing depression in some people. " I stopped taking the medication that day, which was the same day the FDA issued that statement," Christine said.

"Within two weeks, I felt better. I feel a million times better now - the best I've felt in years, and my partner has noticed that we haven't argued in weeks. I don't have a temper, I've been happy. It's shocking to me that it all comes down to that medication - which I'm convinced of because I have no prior history of depression," she said.

"Singulair ruined my whole life. My credit score is ruined - I had perfect credit. I lost my job. I can't buy a car or a house now. I really do blame Singulair, because I was a very stable person, I had a great job, no problems at all. I just feel so much better for coming off it- it's like a miracle. I can live my life and feel normal, finally," she said.

Christine was just 20 years old when she began taking Singulair. The loss and devastation she has experienced in the past four years is more than most people would ever experience in a lifetime. "I thought I was crazy, and I'm not one to take mental illness lightly," she said.

More News
But Christine had no way of knowing what was going to happen. "I am always quite leery of new medications, but Singulair has been on the market for so long - so I didn't think twice about," she said. There were no warnings on the bottles, and none of the doctors she saw mentioned anything about depression being associated with Singulair, nor did the pharmacists. "You would think if they knew they would have warned me - so clearly the doctors didn't know about this a few years ago," she said.

"This has really shocked me, and I'm really angry about it. The more I think about it the angrier I feel. I would like to find a lawyer and pursue this. I'm not a sue-happy person, but when I realize the repercussions of what happened to me, and hear about what other people have gone through, I think this is ridiculous. This is an asthma medication. You would never in a million years think that this would be the problem. I really do hope something happens with this," she said.

Posted by
Josh
on April 8, 2016
I've also experience episodes of A-fib, depression, panic attacks where I couldn't catch my breath, tremor, stomach pains, mood swings, and irritability. That's only a few symptoms I felt, I've only been off the meds for 5 days and this medication is still causing me grief. I hope by the 2 week mark of not taking this medicine I feel much better psychologically and physically. This article is a big help in knowing I'm not alone. Thank you
Posted by
linda depetro rubin
on May 8, 2013
singulair ruined my life for 10 yrs- i took singulair 10 mg each day for asthma...i developed afib was in the hospital for afib 3 times..was on several meds...i was nervous and had depression and sad...the day i stopped singulair i never had afib again and that was 1 yr ago...i wish my dr or someone had told me in those 10 yrs that singulair would do these thing to my health. i even had to take lexipro for 7 yrs of those 10 yrs...i do not take lexipro or singulair any more and feel so good and stable now.