Jordon is almost 18 and just about to graduate high school. But earlier this year he didn't think he was going to make either of these landmark occasions. One night in January, to the shock of his friends and family, he tried to take his own life. His actions didn't make sense. But Jordon was taking the asthma drug Singulair-- and had been for the past year.

Now, several months after his near-death experience and having come off the highly controversial drug, Jordon is sure that it was Singulair that caused him to become depressed and do something so out of character. 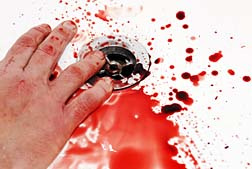 "Before I started taking Singulair I was very up and happy-go-lucky. But when I started taking Singulair I noticed all that my emotions became intensified. I didn't think anything of it at first, and so didn't worry about it. This past year being a senior in high school, it's been both exciting and stressful at the same time, and my emotions around that have been intense. But then I got really depressed, and one night I decided to kill myself. I took an overdose of pills."

"But as I was doing it part of me realized that it wasn't right. So I went to mother and told her what I'd done. And I tried to regurgitate the pills but I only threw up a little bit. Then I was rushed to the medical center, and they gave me charcoal oil and started draining my system. I was in hospital for about three days. It was the most horrible experiences I've ever been through," he said.

Jordon was confused by his actions. "I couldn't figure out why I did it. My doctor couldn't think why I did it, and my psychologist couldn't figure it out either. It didn't make sense. And it didn't fit with my personality," he said. Jordon even went to a local treatment center and they couldn't find anything wrong with him.

"Then I saw something on the news about Singulair and that it was making people depressed and suicidal. Then it all clicked," he said.

Up until that point, Jordon had no idea it could be his asthma medication. Nobody did. Jordon's doctor only warned him about the typical side effects of Singulair - the known side effects - like drowsiness. But in the year that Jordon took Singulair, he noticed he had become depressed and not his usual self. "My moods didn't feel natural. You can ask anyone who knows me - I'm the life of the party - but this was weird. I was getting so depressed."

More News
You would think that people would notice such a change in character, and his friends and parents did, but understandably put it down to pressure at school and the stresses of being a teenager. "They didn't really worry about it because I'm not a depressive type of person. But the night I tried to kill myself, in January, that changed everything."

Jordon was on Singulair for almost one year before he attempted suicide. Today, he no longer takes it. He took himself off it, which is not necessarily recommended, but understandable given the circumstances. "I feel a lot better now," Jordon said. He's looking forward to graduation, and his eighteenth birthday. And, he feels it's important to talk about what happened to him. "If my story will help somebody else from going through the same thing, I want to talk about it."