US Airways Flight 1549 Crashes and Sinks into the Hudson River

US Airways Flight 1549 taking off from New York's La Guardia Airport en route to Charlotte, NC, has crashed into the Hudson river. Rescue efforts involved the Coast Guard, local ferries and marine traffic all removing people from the rapidly sinking wreckage. Police and fire crews were seen rushing into the frigid water. Some reports say that as many as 35 people were rescued from the water. 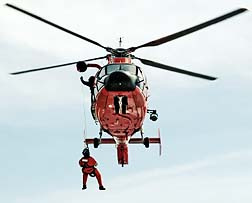 The FAA has confirmed that all passengers, the numbers for which vary between 146 and 160, and 5 crew were rescued from the aircraft and are safe. They have been taken to various hospitals around New York City.

More PLANE CRASH News
US Airways flight 1549 took off at 3:26 pm and less than 5 minutes later was in the water. According to news reports the pilot did try to return to the airport before being forced to land the Airbus A320 on the Hudson River.

One passenger interviewed said the pilot told everyone to brace for a hard landing, which it was. People reportedly remained calm, women and children exiting the plane first, out onto the wings of the aircraft, while the plane began filling with water. By 4:22 pm the plane was almost completely submerged.

Although the cause of the crash is currently unknown, the pilot reportedly radioed air traffic control that the Airbus had encountered a flock of geese, which disabled both engines. Divers are on the scene and are expected to retrieve the flight's recorder over the next 24 hours.

Posted by
ArtNOLA
on January 15, 2017
This was not a "crash" it was a controlled water landing. Get your terminology right.