LAWSUITS NEWS & LEGAL INFORMATION
Home Page >> News Articles >> Is it Safer in the Air or on the Runway?

Is it Safer in the Air or on the Runway?

Yet another pair of planes have clipped each other's wings on the runway. The latest incident of an on-ground plane crash occurred February 24th at Washington's Dulles Airport.

The right wing of a Shuttle America Embraer 170 jet hit the left wingtip of a United Airlines Airbus 319. No injuries were reported among the 66 people aboard the UA flight 768, which was en route to Dallas-Fort Worth, or among the 92 heading to Albuquerque International Sunport Airport on the Airbus flight 783. The planes are currently under inspection for damage while the Federal Aviation Administration investigates the cause of the accident. 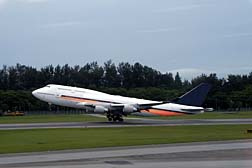 The occurrence is just one in a string of close encounters on runways. Less than two weeks ago, on February 17th, two commercial airlines clipped wings at Ronald Reagan Washington National Airport. This time it involved a US Airways Express regional jet on its way to Rochester, NY and US Airways A319 on route to New York's LaGuardia Airport. Sixty-three passengers were evacuated and accommodated on another plane. Damage to the aircrafts was light and the National Transportation Safety Board will determine the cause, warning it could take months.

In another incident, this time at Newark Liberty International Airport in October 2006, a Lufthansa Boeing 747 clipped the right wing of a Continental Boeing 757 being towed on the runway to a hangar for service. Once again, passengers were disembarked (this time, 291) and put on other flights.

Commercial airlines aren't the only ones getting too cozy. A chartered Gulfstream II jet carrying presidential hopeful Barack Obama hit the wing of a parked Cessna 208 general aviation aircraft after landing at Chicago's Midway airport on January 12th. In the early hours of that Saturday morning, returning from preparation for the Nevada caucus, Obama and his party and crew of 12 claimed to have been unaware of the collision. According to Federal Aviation Administration spokeswoman Elizabeth Isham-Cory, the plane had taxied to a private aviation parking area at the south end of the airport and was therefore no longer under the FAA's air traffic control. The investigation could take weeks or months.

The question in the face of increasing on-ground collisions is who is at fault?

Runway safety was the focus of a February 13th hearing of the House aviation subcommittee hearing, reports the media site Aviation Today. Witnesses allegedly said that although the FAA has made great progress in safety, runway incursions--planes in near miss incidents on the ground--remain a major runway safety issue. At the hearings called by the House of Representatives Transportation and Infrastructure Committee's Aviation Subcommittee, the finger is being squarely pointed at poor FAA leadership, malfunctioning technology, and overworked controllers.

One airline pilot/air traffic controller commented on The Consumerist website that the increase in wing clipping has deep roots. For one, the growing ranks of inexperienced pilots are at issue. The minimum number of qualifying hours to obtain a license has been chopped dramatically in the face of pilot shortages. Major airlines have reduced their required flying hours to1500, plus 500 hours cross-country, down from 4,000. Regionals and smaller airlines are known to hire with 500 hours of experience, some dipping as low as 250 hours.

Inexperience is also an ongoing problem within the National Air Traffic Control Association and had shocking beginnings. In 1981, President Ronald Reagan fired more than11,000 air traffic controllers over an illegal strike, sealed with a lifetime ban on rehiring by the FAA. The baby boomers hired to replace them are now retiring en masse but with inadequate numbers to take their place. According to the Consumerist post, the FAA finds itself in desperate enough straits to resort to hiring off the street, with little time to train.

More News
Fast forward to 2006 when tensions skyrocketed again between the FAA and the National Air Traffic Controllers Association (NATCA) over major wage concessions proposed in a new contract. A spokesperson for NATCA said at the time that experienced controllers were refusing to take a pay cut to transfer to larger centers such as Chicago, Dallas, Fort Worth, and Atlanta, which has left those and the growing list of busy airports manned by the less experienced.

Add to the mix the rocketing increase in air traffic, thanks in large part to booming world tourism, and incidents of wing clipping might make one heave a sigh of relief and good luck when the plane actually leaves the ground.