"This place used to be beautiful but the pig pen right behind my fence has destroyed it," says John Williams. This hog farm has become more than a farm nuisance for Williams: it has also devastated his property value.

Williams's woes began when his neighbor refused to repair a fence. Instead, nails and broken wire were sticking through onto his property and graffiti was painted all over the boards. As you can imagine, it was an eyesore. But it was nothing compared to what the neighbor had in store: seven hogs less than 80' away.

"The smell is in my yard and even my home," says Williams, "and they won't do anything about it because I called the Sheriff and animal control when their horses busted through the fence onto my property." Williams believes that this is the reason why they won't fix the fence and why they erected a pig pen right behind his house. 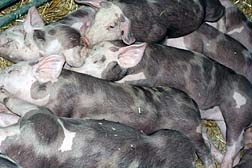 "I'm a disabled veteran—in a wheelchair—so there isn't much I can do about it but complain to the authorities; I even wrote to the governor," says Williams. "It stinks to high hell and I have to spray with air freshener constantly," he says. "I even had to buy a portable electric air freshener system and move it into every room. But if the wind blows toward my house, nothing can disguise the smell. In fact it is so sickening you can barely breathe.

Then they put a pig pen right behind my house, only 80 feet away. It is a 20' x 20' pen with seven large hogs in it. It stinks to high hell and the entire house smells. I have to spray air freshener constantly. And I had to buy a portable electric air freshener system. But if the wind blows toward my house, there is nothing I can do and it is so sickening you can barely breathe."

Williams is not suffering alone. His wife has constant headaches and the neighbor directly behind them has two young daughters, both with allergies. And they always complain of the stench. "They have a beautiful swimming pool in their yard and they can't even splash around in it," says Williams.

Along with the smell, noise is another nuisance. "I can hear the hogs squealing from my back door because they are always hungry—I don't think they get fed every day," he adds.

"The hogs have destroyed the value of my home. We tried to sell the house but nobody wants to buy it. Would you buy a house with hogs outside your back door? This situation has cost me a bundle. I have over $1500 in expenses such as a surveyor bill ($450); consultation from a lawyer; aerial photographs; air fresheners and at least $200 in gas running around the county trying to get help.

I have an 11 acre farm—I grow tomatoes and pepper plants-- with a 3,000 sq ft home that he destroyed. I want to sue for the value of my home plus damages for our health."

Williams may want to pursue a 'nuisance action' against his neighbor.

More News
"Nuisance actions" are considered a supplement to regulation and litigation under the environmental laws. To determine unreasonable use of property (that would constitute a nuisance) Williams should ask whether or not the defendant's use of the property is "unreasonable" under the circumstances. Did the particular use pre-exist before Williams complained? Has his neighbor (the defendant) expanded the operation and/or property and is it encroaching on Williams's (the complainant's) property?

If the answer to either of these questions is "yes", Williams may want to consider taking legal action to stop or "abate" a public nuisance. A private nuisance may be stopped, or "abated," by a legal action usually brought by a private property owner against an adjacent property owner.