Farm Nuisance: Too Close for Comfort

"We live in an agricultural community but there's no reason why someone has to build turkey houses right across the street from us," says Jamie H. Her family now has to deal with yet another poultry farm nuisance.

Jamie and her family have owned 380 acres for more than 30 years and have four established residences on their land. Now their homes and their health are at risk: someone bought 62 acres across the road and plans to build turkey houses. "He contacted us several months ago and asked for our permission to build the houses two miles away," says Jamie. "I wasn't thrilled about it but my husband said as long as it was that far away, it would be alright. 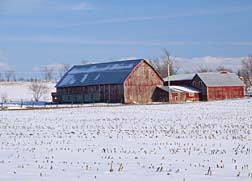 "The same gentleman came back to us about one week later and this time he wanted permission to cross our land with a road to reach the area where he planned on building the turkey houses. At that point we said no: our concern then was the safety of our children with the large trucks going back and forth and also our loss of land.

Another month went by and he bought property directly across the road from us and said he was going to build the turkey houses there. We think he was mad at us about not letting him build the road and I also think he did this partially out of spite. But either way, we lose.

My husband told him we did not want the houses built across the road and he would do whatever it takes to stop it from happening. My husband even met with him, and the two of them met with realtors to help find other suitable land. At one point he had set up a land swap with a neighbor but the deal fell through at the last minute.

The turkey man called us a month ago and said he had heard that we were very disgruntled and had heard threats. Then he offered his land to us - he wanted us to buy it from him but way over the appraised price - almost $1,000 per acre over. What a shyster!

He is now talking about building the houses in the original location, i.e., two miles away, but he wants to run his electric line through our property. So now he wants an electrical easement and he wants us to buy the property across the street. Just to keep the turkeys out.

More News
We are the fifth generation to live on this land; we have four established residences and we just don't want him in the area, period. There are too many problems, especially avian flu. The closest acceptable distance would be two miles away and the turkey man could easily do that. There's plenty of land in other places that wouldn't infringe upon residents. You don't need to build turkey houses across the street from established homes.

We live in an agricultural community and because we have no zoning laws in this rural area, apparently we are stuck with it. To be honest, we live in such a rural area that we don't even have a city council. You ask most people around here and they raise turkeys themselves. We have very good friends that raise turkeys and I am afraid of upsetting them. At the same time I know people have to make a living but I don't want these turkey houses that close to my home.

I am looking on the Internet for a possible solution; we don't know where to turn and don't know what our rights are. Most of all, I am concerned about the health of our children. What can we do?