Sleepless on the Farm

It has been a long time since Tim Wilson and his wife got to sleep in. Every morning around 4am the neighbor's two dozen or so roosters—just outside their bedroom window—give them a wake-up call. The rooster crows have turned into a frustrating farm nuisance.

"We bought this land and moved here in the summer of 2005 and began to excavate and repair the property for our house," says Wilson (not his real name). "The first day of excavation gave me the opportunity to meet my neighbor. He approached me and was immediately concerned about where I was going to build our house. 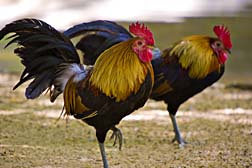 "Apparently his family had lived on this working farm for several years. They lived off the grid with a small generator and wood-burning stove. He seemed very reasonable and I discussed our building plans. At that time I found out that his house was at the very back of his property—our lots are more than 870' deep and 100' wide. With the setbacks of county codes, you have to stay 20' off the property line with any structure. When I learned these facts and saw the layout of his property, I decided to alter our plans because I also wanted to be far back and didn't want my house next to his. This wasn't a big deal with the size of our property.

Building of our home continued for the next 18 months and we had it completed in the spring of 2007. We had no complaints with our neighbor: his rooster/chicken operation was far back—I'm guessing near their house—because we couldn't see it and heard only one rooster. In early August we woke to the crowing of a nearby rooster and saw tin roofing, made into a little rooster house. The rooster was staked to the tin house, about 50 feet from our bedroom window.

For three days that rooster woke us up before 4am, just as we saw a faint light in the sky. He is really something to behold—when our friends hear him, they burst out laughing. But we aren't finding him amusing.

On the third day we decided to visit our neighbor. I asked him why he put the rooster outside my bedroom window. He said 'Why are you asking, is it bothering you?'
"Well, he is right outside our bedroom window.'

'Yeah, and I'm getting ready to move a few dozen more up here,' he told us.
'What are you doing with that many roosters?' I asked. They don't lay eggs; maybe they were being kept as fighting roosters...

'I use them for impregnating the hens,' he replied, 'and when the eggs hatch, whichever ones are the roosters, we raise them to eat.'

More News
I didn't care if he raised roosters to eat but I asked him how many crowed. He said that we would only hear a few roosters. A few turned out to be about seven and I strongly objected to roosters that close to my house. I told him that I would help move the birds to a place where the noise was acceptable for us. He declined my offer. Within a few weeks we had a cacophony, all before 4am.

I would love to sleep in some mornings but that's not going to happen. I contacted the police and he said the property in this subdivision is agricultural and my neighbor is not violating any law. I told the police officer my part of the story—he moved them after my house was built. My neighbor wanted this part of the property fertilized, without having to shovel chicken manure.

If I knew, I would have changed my plans and not built our house here. I want an injunction to make him move the roosters back to their original location or a place that is acceptable to all of us and I would volunteer my labor. I've done as much as I can--now I need legal help."