"Two nights last summer, I had to sleep in my car because of the stink," says Don Peck of Zearing, Iowa. "The stink" that Mr. Peck refers to is the odor from a livestock truck wash at a factory farm several miles from his home.

"My doctor told me to sell my house and move," said Peck, who has respiratory problems he blames on the stench. "I put it on the market last summer but I haven't had a single call."

Like many residents in the rural Midwest, Mr. Peck is coping with the impact of a nearby factory farm. Factory farms are concentrated operations that raise, feed, clean or slaughter animals on a mass scale. As opposed to the family farm, factory farms often crush tens of thousands of animals into small confines, leading to air and water pollution and public health concerns. 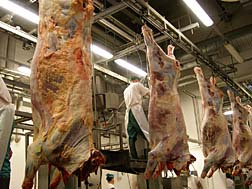 Citizens across the Midwest are taking their complaints to the courts -- and winning.

Stench Enters Sewers, Homes
Scientists have shown that outdoor stench from factory farms, such as airborne fecal dust, can lead to health problems among factory farm workers and neighbors. But the stench can also enter homes through sewage systems.

Jo Blessing of Zearing gets a strong whiff of hog manure from Reed Enterprises when she opens her washing machine. The smell, which she likens to the smell of a dead animal, first greeted her when she went to run a wash last summer.

"I opened the washer and the smell was everywhere," Blessing said.

Believe it or not, the manure from the livestock trucks is washed directly into the city's sewer system. Jim Stricker, who runs the Iowa Department of Natural Resources' regional environmental protection office in Des Moines, said that Reed's operation is the main reason the city now has to expand its sewage treatment operation.

The owner of the Iowa hog truck wash is Rick Reed, the son of Zearing Mayor Lucille Reed. Some residents feel that regulators have looked the other way because of Reed's connections. "It doesn't help that his mother is the mayor," said Stricker, "We get some strongly worded complaints."

Taking It to the Courts
Litigation is becoming an increasingly common strategy for citizens fighting factory farms. The reason? Critics charge that state and local governments are not doing enough to regulate pollution from these large-scale operations.

For example, Iowa simply has no regulations concerning hog odor, Stricker notes. After exhausting their options in the legislature, a group of residents sued for nuisance damages last year, claiming respiratory and digestive problems, among others, related to the operation.

More News
And citizens are connecting around the issue, across counties and communities. Earlier this month in Indiana, citizens from 14 counties gathered for strategic planning meeting on how to restrict factory farms through legislative lobbying as well as litigation.

"We chose the court route because it's been the most successful for us," said conference participant Jae Breitweiser of Jefferson County.

Advocacy groups like the Humane Society of the United States and the Grace Factory Farm Project also publish guides that recommend lawsuits as a useful strategy to respond to factory farms.

Phil Bir of Lagrange County, Indiana believes that most lawmakers "don't care about you and I who live there" next to factory farms. This is why, he notes, citizens in Lagrange County have recently sued in state court.