"What Stinks?" It's the Factory Farm

"A dozen hogs don't smell like a bed of roses, but a few thousand hogs could knock a rat off a gut wagon," says Ken Midkiff of the Sierra Club. And for the hog farmer, a possible farm nuisance lawsuit brought about by the neighbors.

Midkiff should know. He grew up on a family farm that raised pigs and is involved in various agricultural initiatives. But the farm life that Ken knew is nothing like the large-scale factory farms that are popping up all across America. To Midkiff and many others, factory farms are creating a significant public health crisis, and the government is doing little to stop it. 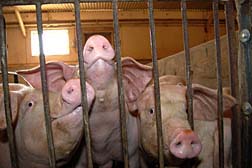 Factory Farms: A New Menace
Factory farms are large-scale farming operations, sometimes known as Concentrated Animal Feeding Operations (CAFOs). Factory farms have spread like wildfire across the country over the last two decades, as a way for corporations to increase profits by producing and slaughtering the maximum number of animals per square foot. For example, a typical factory farm for chickens today consists of row upon row of low-slung buildings, each containing up to 30,000 chickens.

More News
Many environmental and civic organizations have raised the alarm about factory farms, citing concerns for the health of neighbors and communities. According to the U.S. Centers for Disease Control and Prevention (CDC), factory farms can cause adverse health reactions including acute and chronic lung disease, musculoskeletal injuries, and serious infections transmitted from animals to human beings.

In addition to asthma and other health concerns, many neighbors are also concerned about factory farms' environmental impact. Groundwater contamination has been linked to CAFOs in 24 U.S. states. According to the Environmental Protection Agency, hog, chicken and cattle waste are responsible for polluting 35,000 miles of U.S. rivers.

And the problem is growing. The Worldwatch Institute reports that 74 percent of the world's poultry, 43 percent of beef, and 68 percent of eggs are now produced by factory farms. Stay tuned to find out what is being done, and what you can do, about this serious issue...