Factory Farms: What Can Be Done?

Once upon a time, Mrs. Edwards and her neighbors were close, attending the same church and even vacationing together. But now, they are no longer on speaking terms; in large part because of the 16 giant chicken houses the neighbors built, containing nearly half a million birds.

Community activists like Midkiff of the Sierra Club have been traveling the country to document the problem of factory farms that are creating an increasing public health crisis. Recently, Midkiff spoke with the Edwards family, whose next-door neighbors were contracted by Tyson Foods in 1997 to operate a chicken "CAFO" on their property. 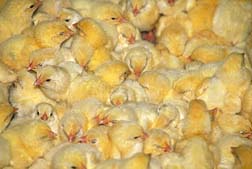 "The fecal dust, chemicals, and smell from that place keep us indoors most days," says Mrs. Edwards, "I have to keep my windows shut, and the house gets coated with grime; a lot of days it's crawling with flies.

"You see that big pile of chicken poop right across the road?" she asks. "We were holding my husband's memorial service when right in the middle of it several trucks loaded with manure and dead chickens went right by the cemetery where we were gathered."

More News
In addition to the Sierra Club, health organizations are also speaking out. For example, the American Public Health Association, the oldest and largest organization of public health professionals in the world, has issued a resolution urging federal, state, and local governments to impose a precautionary moratorium on all new factory farms.

But the government is slow to act. Although a few states and towns have dealt with factory farm pollution aggressively by banning the construction of new CAFOs, most have not. The federal government has been slow to act, perhaps because the corporations that own the factory farms often contribute heavily to federal politicians' campaigns.

Meanwhile, citizens are turning to the courts for redress. "There's only one solution until the government gets its act together," says one health advocate, "You have to hit the factory farms where it hurts - in their pocketbook."
"We have seen great success with lawsuits against these companies," she says. "An expensive class-action settlement can get a company to clean up its act, and fast."