Peter Chase (not his real name) takes a whiff of the air on his back patio. "Another day indoors," he sighs. "I could wait forever for the government to take action [against factory farms]," says Peter. "The only way to get these corporations to stop polluting is by making them pay - through lawsuits."

Despite recent EPA action against neighboring factory farms with leaking waste lagoons, Peter doesn't believe the smell, or the situation, will improve any time soon. 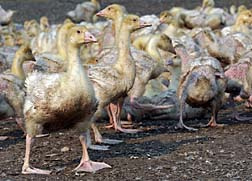 After years of complaints, government inspectors have cited the farms, stating that runoff could pollute the Santa Ana River. But Peter wonders if the companies will really fix the problem, or just pay the federal penalities and continue business as usual.

"They might just pay the fines and keep on going as they are," he says. "Nope, this time I'm calling a lawyer."

Powerful Farm Lobbyists Pull Strings in Washington
Between 1974 and 2002, the number of corporate-owned U.S. farms (factory farms) increased by more than 46 percent. Unlike family farms, factory farm owners do not live on site and do not have to smell the overwhelming stench of the typically overcrowded animals. Only the farm workers and neighbors (and the animals) are witness to the questionable feeding, slaughtering and waste-management practices that have galvanized communities to take action.

Unfortunately, our federal and state laws have not kept up with the rapid increase in factory farms. Communities are often left with no recourse but lawsuits to deal with pollution from factory farms.

Why has the federal government been sitting on its hands? Well, it could have something to do with the corporate farm lobbyists in Washington.

Follow the Money
According to the Center for Responsive Politics, agribusinesses such as factory farms contributed more than $381 million to federal election campaigns between 1990 and 2006. Where does all this money go?

Sustainable Table, a clean water advocacy group, notes: "A considerable portion of agribusiness money ends up in the pockets of politicians who have the most control over agricultural policy, including members of the House and Senate agriculture committees, as well as to members of the Senate's Nutrition and Forestry Committees."

The group cites the Food Quality Protection Act, which loosened pesticide regulations, as one example. Corporations donated $9.3 million to members of the House of Representatives, 73 percent of this which went to the legislators that co-sponsored the Act, and to members of the House Commerce Committee. Each Committee member received $11,300 more than the average co-sponsor in the House--2 ½ times more than committee members who did not support the bill.

Who's Footing the Cleanup Bill? You Are!
To add insult to injury, US taxpayers are footing the bill for several government subsidies that help factory farms profit by covering the costs of the corporations' programs to improve environmental quality.

While other industries pay for their own pollution controls and are expected to protect neighboring communities, factory farms have "exploited the farm subsidy system to make us pay for their mess," says Peter.

Advocates at Sustainable Table concur. "Your tax money is being used to help clean up massive amounts of pollution that large industrial farms create, holding corporations unaccountable and letting them spend their profits elsewhere."

More News
The organization notes that the federal Air Compliance Agreement offers factory farms "a free pass for air-quality violations," as long as they participate in an emissions monitoring study, the cost of which is significantly lower than the fines they would be paying if they were cited under the Clean Air Act. The result? Factory farm pollution continues, and profits continue to rise for corporate farms.

Take Action: Through the Courts
The government itself acknowledges that there is a problem - but has not taken action to solve it. According to an Environmental Protection Agency report, the smelly odor, nuisance and health code violations of factory farms are often not regulated by federal, or state, laws.

While some municipalities have had success in fighting factory farm pollution, the most effective means of stopping the pollution is litigation. Many communities have filed successful lawsuits for damages.

Posted by
howard k jones
on April 23, 2017
I live in Gordon county Ga. 1.There are no laws concerning stink in the state of Ga.2. Call everyone in the Fed and State Gov concerning Environmental and health issues and you will get sent back to the state agencies and get no where if you don't believe me get on your computer and your phone and do it yourself. In short order you will learn that they bring in so much revenue that nothing will be done about. I can park my truck on the road and crank up the radio and in short order I will be in jail. But they can stink out the country side so bad you cant be outside and that's a health issue physical and mental nothing can be done about it where is the fair judgement in that?
Posted by
Faye Cannon
on October 7, 2015
I live within a 1000 ft of chicken houses also and the odor is so unbearable that I too have to stay inside. I suffer horrible allergies and they are made much worse by this. Since they built these chicken houses we no longer have cookouts or family over for anything. I live in Moultrie GA on 10 acres of what use to be my dream place and is now a nightmare!
Posted by
Billy mcmillan
on June 28, 2013
I live within a 1000 ft of chicken houses and the stench and odor is so bad some days I have to stay inside my house, last summer it also got in my house, I live in Nashville Ga. I want to know if there is anything I can do about this, I want to sell my house and move but nobody will buy it