Factory Farms: Air Pollution and the Threat of Bird Flu

As neighbors of factory farms continue to file lawsuits claiming asthma and other illnesses, some experts are documenting another public health threat: bird flu.

Kevin Parcell is the director of a [global initiative] aimed at creating resilient communities capable of withstanding crises such as avian influenza (bird flu). LawyersandSettlements spoke with him recently about the potential of a pandemic in the US, and the connection between factory farms, air pollution and bird flu.

LAS: What have you been hearing from neighbors of factory farms? 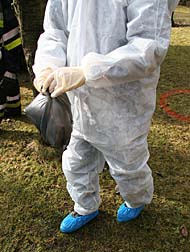 "Kevin: The full range of complaints. Home owners are trapped on properties they can't give away. The problem is that livestock produces more waste than does the human population, but it isn't regulated by federal law as is human waste.

Kevin: Well, some say it smells like money! It's unfortunate that industry lobbyists have kept federal oversight largely limited to fines that are too small to deter bad practices.

Worse than the stench is the disease threat to neighbors. In my research, it became evident that factory farms are the underlying cause of avian flu and its spread. When our best science confirmed the link early this year, I began to speak out against the practice of crowding animals.

Some of the latest strains of bird flu are more efficient, more resistant to antivirals and vaccines, and undetectable. Something has to be done - fast.

LAS: How is bird flu spread by factory farms?
Kevin: It is spread mostly by commercial use of manure, but recently house flies have been shown to be transmitters of avian influenza, and factory farms generate plagues of flies in residential areas.

The highly pathogenic variety of the bird flu virus needs overcrowding of animals to arise, and only factory farms provide that. In fact, the FAO (UN Food and Agriculture Organization) announced this spring that the deadly variety is now embedded in animal populations and will continue to spread through commercial activity.

We probably can't eradicate this virus as long as these conditions persist.

LAS: What about the threat of pandemic?
Kevin: In my opinion, the greatest threat is that we will soon see highly efficient bird-to-human strains begin to emerge from factory farms.

Such varieties could be identical in effect to a highly transmissible human-to human virus. Confining the bug to factory farms is possibly breeding a super strain [of bird flu].

LAS: Many people think of bird flu as something 'foreign' - but you're suggesting it's not.

Kevin: That's right. The 1918 Spanish Flu pandemic, which was also a bird flu, started in Kansas, so it's a mistake to think of this as somebody else's problem.

In fact, culling of backyard farms in southeast Asia and north Africa has decreased human contact. That's taken bird flu almost out of the news for the last few months, but the virus the virus continues to evolve in factory farms. .

LAS: Is the government doing anything about this?
Kevin: Industry lobbyists have been effective at keeping factory farms exempt from federal regulation. For example, Arkansas' Senator Lincoln is pushing a bill right now to exempt manure from [certain legislation], supposedly to protect family farms, but Arkansas is one of the worst factory farm polluters.

LAS: What can communities do?

More News
Kevin: When people in affected areas band together they can get results if they involve the media. I remember one campaign that put a fellow in a chicken suit and had him visit his Congressman, which brought the live news cams and led to increased state regulations.

And, of course, class action nuisance suits are a good strategy.

Consumers can also use their wallets to punish the industry at the checkout counter. Buy organic and locally produced food. That combination -- legal and consumer action -- will bring change.

LAS: But will that change be on time?

Kevin: We can't know, but the global marketplace cannot withstand the impact of a major pandemic. We simply must do everything we can to shut down the factory farms now.