Roxana, Illinois, population 1,547, is a tiny little klatch of wood frame homes resting along the Missouri border, some of them built not more than 500 feet from the site of the Shell Oil refinery that sprang up there at the beginning of the 1900s. 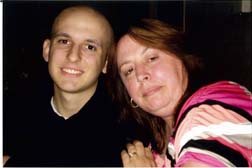 Most of the families in Roxana have been there for decades and they once went to sleep at night knowing that as sure as gas makes cars go they had a steady job. They now worry that they might be the next person in town to find out that they or someone in their family has cancer because of the benzene plume that flows underneath their homes.

Attorney Chris Dysart, from Dysart Law in Missouri, represents 20-year-old Scott Monroe (pictured at left with his mother), who was diagnosed with acute myelogenous leukemia (AML) in 2010. Monroe's personal injury complaint recently filed against Shell Oil, BP and others alleges he developed AML as a result of "benzene in the groundwater, ground and air under and around his home in Roxana and in and around the Roxana high school, middle school and elementary school he attended."

Benzene is a known carcinogen and, as Dysart points out, "having it in the ground water where it can come up into their homes as a result of what is known as vapor intrusion creates a significant risk of developing leukemia."

"One of the biggest concerns of the people that live there is that they might develop leukemia as a result of exposure to benzene," says attorney Chris Dysart, who, in addition to the Monroe personal injury suit, has also file a class action on behalf of the people in the community alleging that BP and Shell and others have exposed the community to a toxic stew of dangerous chemicals including benzene, toluene, ethylbenzene and xylene, creating "a health hazard and severely injuring the value of their property."

According to the complaint, Shell has known about the benzene-related health risks including its link to cancer for years. Attorney Dysart maintains that Shell publicly minimized and hid the dangers, and was well aware that benzene vapors were entering homes and other properties in Roxana since the 1980s.

More PERSONAL INJURY News
Specifically, the suit alleges that the Wood River Plant did nothing "to clean up or otherwise" address a 1986 spill of some 8,400 gallons of pure benzene that remains plumed beneath the town.

The class action also demands that the community be provided with medical monitoring.


Chris Dysart is an experienced environmental lawyer. The Dysart Law Firm recently finalized a $39.5 million settlement with Shell Oil, BP Products, Premcor, Sinclair and Apex Oil, on behalf of the town of Hartford, Illinois. Dysart is a former federal prosecutor and former trial attorney with the US Department of Justice.