Karen Barth Menzies is a partner of the Los Angeles based law firm of Baum, Hedlund, Aristei, Goldman & Menzies and heads the firm's Pharmaceutical Antidepressant Litigation Department. An activist and consumer advocate, she has been involved with SSRI-induced suicide/violence litigation involving Prozac, Paxil and Zoloft for 15 years and she is now a leading legal authority on Paxil and birth defects. The first birth defects cases were filed in the spring of 2006. 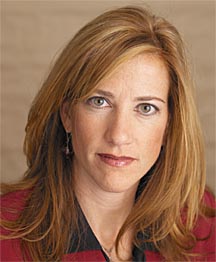 Ms. Menzies, along with other drug product liability lawyers at Baum Hedlund, has seen first-hand the harm caused by defective drugs and the lives destroyed. She has testified four times before the government regarding the increased risk of child suicide with antidepressants, as well as adolescents and adults. "Put me out of business for the right reasons — warn [the public] about these drugs," said Ms. Menzies during her February 2004 testimony before the Food and Drug Administration's Psychopharmacologic Drugs Advisory Committee. Ms. Menzies had no idea she would be this busy; as a consequence, she has gotten to know the drug companies very well indeed.

Why have you specialized in SSRI litigation?
KBM: I didn't mean to spend so much time and energy on the SSRIs--five years ago I thought that by now the drug companies would have been more forthcoming and forced to warn the public about the risks associated with their drugs; the FDA would have done its job; and that patients and parents would be informed about the real risks related to SSRIs.

It seems that every time I turn around, there is another side effect caused by SSRIs; people have not been warned about all of the dangerous and often lethal side effects of these anti-depressants, and most distressing is that they are harming kids, including babies. Only now, after the drugs have been on the market for over 15 years, is the public learning about the risk of birth defects. That is just unacceptable.

Who are possible clients/plaintiffs and how do they find you?
KBM: Unfortunately we have to turn away some potential clients. We can't help some people the way we want simply because there are so many people who have been harmed. For example, we can't help children who were on multiple drugs. We try our best to disseminate the information we have and try to raise public awareness: there is a huge portion of the population that has no idea of the risks involved with SSRIs. The drug companies have not been forthcoming to the public or the health care providers about all of the risks of their drugs.

Why not?
KBM: They are protecting their market share. They are generating profits and treating the medical profession like a money-making venture, at all costs so you have both patients and physicians desperately seeking information. They find our law firm on the Internet and they want to hear both sides of the story. Remarkably, I have been contacted by numerous doctors, trying to find out accurate information about the side effects of these drugs. I never thought a doctor would contact a plaintiff lawyer, asking advice regarding his patient! They are clearly not getting information they need from the drug companies.


Where is litigation now?
KBM: Each of the different side effects is in different stages. Litigation is winding down on withdrawal claims for Paxil: GlaxoSmithKline (GSK) began warning the public about withdrawal symptoms in Dec 2001; therefore the many statutes on those cases have mainly expired, except for certain states.

As for suicides, the black box warning was issued in January 2005 and we are beginning to see, for the majority of cases, the two-year statute expiring, even though there is still new litigation. But from here on out, attorneys will have to consider including a medical malpractice claim against the physician, along with the failure to adequately warn from the drug maker.

Birth defects cases are in the early stages. The litigation itself has been going on for about a year. We have many cases on file and the numbers are growing.

Where is it heading?
KBM: Discovery will probably take a year or so. We need to establish what GSK knew and when. So far, the biggest problem is having them turn over documents in a timely fashion; they have many delay tactics.

Why can't the court order them to turn over documents?
KBM: We often do seek the court's help. We had to go to court again this week to help put pressure on the drug company to stop the delay. Their lawyers try to stall for as long as they can.

What is the point if they have to give you the documents eventually?
KBM: Perhaps GSK just wants to wear plaintiffs' attorneys down. Maybe they are hoping the plaintiff lawyers won't spend the time and money necessary to dig. But we've already dug trenches for the long haul - we have dug deep for many years now. They know we aren't going away.

We intend to expose what GSK knew and when it knew. And we will use whatever means we can, by the court and otherwise, to have them turn over the documents and witnesses.

How do you work with other lawyers?
KBM: The number of lawyers taking on birth defect cases is also growing. We try to coordinate our efforts and it helps when you are taking on such a huge company such as GSK -- to take on Goliath, the more help you have in a cohesive manner makes it more likely that we will succeed. If there are more plaintiff lawyers it makes for a more even playing field, there are more David's to help in the fight.

What can a SSRI victim do to get involved with litigation?
KBM: Do research and find an attorney who is actually litigating the case against GSK. Ask the people you are contacting the following:
Who is going to be my lawyer?
Are you litigating against GSK?
Have you actively filed any cases or are you sending them to other firms?

We don't accept every case. We carefully consider the facts of each case to see if it is viable for litigation purposes. The drug may have caused the problem but there are many variables that can preclude the claim. Medically it could be legitimate, but maybe not for litigation. However, we will let a caller know that there are other firms out there accepting cases.

What are you up against?
KBM: It is not so much from a litigation standpoint, but a public health and safety standpoint -- my biggest concern right now is that physician "opinion leaders" with industry ties are actively trying to convince doctors and patients that a pregnant woman is at greater risk of depression during her pregnancy and should take antidepressants despite the risk to her unborn child. It's unconscionable and disgusting to me. Women of childbearing years are big business for antidepressant manufacturers and women who are pregnant may be especially vulnerable given the emotional ups and downs that can be caused by shifting hormones. Thus, they are an enticing market. Look at any woman's magazine and you can see this is an important market for them. There appears to be a carefully orchestrated and concerted effort to counteract the concerns that have been raised by the studies showing a real risk. Drug industry apologists are trying to deflect attention off of the potentially catastrophic risks of cardiac birth defects and trying to shift attention to "the dangers of untreated depression." But there are alternatives and given the risk, most women would never risk their unborn babies' lives.

More News
In 2004 Ms. Menzies was named Lawyer of the Year by Lawyer's Weekly, California Lawyer of the Year by California Lawyer magazine and in 2005, one of The National Law Journal's Top 40 Under 40 for her "extraordinary achievements" and "impressive track record" for "stepping up her fight in the past few years, advocating that pharmaceutical companies should warn about the alleged risks of antidepressant drugs." In 2006 she was a Finalist for the 2006 Consumer Attorney of the Year Award re: Paxil Products Liability Litigation "In Recognition and Appreciation of How Consumer Attorneys Use Skill and Determination to Create a More Just Society for California Consumers."

Baum Hedlund has been representing victims of harmful drugs since the late 1980s. The firm started taking on SSRI-antidepressant cases 17 years ago and has been handling these types of cases continually ever since, longer than any other law firm in the country. The firm represented the widow of 1960's rock star Del Shannon and the family of comedian Phil Hartman in their antidepressant related death cases. Against great odds, attorneys at Baum Hedlund have prevailed in representing thousands of people harmed by antidepressants. Baum Hedlund lawyers fight vigorously for the rights of their clients.

Posted by
Steve H
on June 5, 2012
I, as a father, was taking Paxil when my daughter was conceived. She had multiple heart conditions which could not be repaired once outside of the mother's womb. She passed away the same day she was born. What research has or is being done to see if Paxil in the father's system (and passed into the mother's system) did or did not contribute to these birth defects and the death of my daughter?