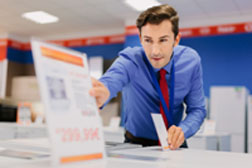 Employment experts say the retail and restaurant sectors will be impacted the most. For many assistant managers and managers, their exempt job classifications will be reassessed and no doubt changed. If a retail manager spent most of her time performing non-managerial duties, it was generally enough to pay $455 per week, even though she was misclassified as exempt.

Say a restaurant manager in California earns $37,440 (i.e., at least two times the state minimum wage for full-time employment), met the salary level requirements of both the state and federal overtime exemptions and is classified as exempt, depending upon his duties. With the new overtime proposal in effect, that manager would need to be paid more or reclassified, regardless that he is paid a sufficient amount under California law.

Constance has been a sales manager in Los Angeles for more than eight years. “I have been scheduled - a term used loosely - a 40 hour work week, ” she says in an e-mail. “The average time I work however is 50 hours per week. In the last few months that increased to 60 hours in order to try to complete our daily tasks, which includes stocking shelves, for all of us. Even with the increase of scheduled work hours per week and additional unscheduled hours worked, we are not getting paid overtime. Working past our scheduled work day could be defined as working off the clock. We were not denied meal or rest breaks but we work through our lunches in order to get our work completed.”

More CALIFORNIA OVERTIME News
Even when Constance and her assistant manager worked 60 hours per week she wasn’t paid overtime because she was paid $34,700. Although politicians see this change in overtime rules as good news for workers like Constance, The National Retail Federation, a business group, says its members would probably respond by converting many salaried workers to hourly status, which could cost them benefits such as paid vacation. Other salaried workers would have their hours cut and wouldn’t receive higher pay. Businesses might hire additional employees to avoid paying overtime or extend the hours they give part-timers. “It’s a job creation measure,” Daniel Hamermesh, an economist at the University of Texas, Austin, told The New York Post. “Employers will substitute workers for hours, when the hours get more expensive.”