Although California’s Domestic Worker Bill of Rights is supposed to protect in-home workers from California overtime violations, some caregivers have been paid less than the federal minimum wage and they are filing overtime complaints. 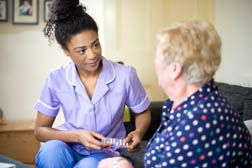 Last week, the owners of San Miguel Homes for the Elderly, LLC, who operate three residential care facilities for the elderly in Union City, were sued by the U.S. Department of Labor (DOL) for violations of federal wage and hour violations. Twenty-two Filipino caregivers typically worked more than 40 hours per week but they were either paid eight hours per day, or they were paid a flat daily rate. (Paying “day rates” is illegal under the California AB 241 bill because it doesn’t allow for overtime compensation.) After taking into account not being paid a time-and-a-half overtime rate, and in some instances not getting meal or rest breaks, the workers were making less than federal minimum wage, which is currently $7.25 per hour.

Owners Precilla San Miguel and her two sons, Teofilo Cris Sanque and Ryan San Miguel, conveniently failed to keep proper records of employees’ hours worked. Precilla San Miguel is president and 60-percent owner and a manager of San Miguel Homes for the Elderly and before June of 2014, she was the sole proprietor of Quality In Home Care, which she also operated with her sons. The lawsuit claims that from October 21, 2012, the defendants violated federal wage law by paying workers for eight hours of work or a flat daily rate without accounting for all hours worked.

More CALIFORNIA OVERTIME News
If an employer fails to pay overtime, a domestic worker - including caregivers, housekeepers, maids, childcare providers and personal assistants - can file a home aides’ overtime lawsuit against their employer. A domestic worker who files a California overtime lawsuit can potentially recover unpaid wages and overtime. As well, compensation can include reasonable attorney’s fees, associated litigation costs, interest and penalties.

The DOL filed a lawsuit in U.S. District Court in Northern California after attempts at reaching a settlement were exhausted, according to the Bay City News Service. Overtime pay lawsuits are typically filed when employees have first tried to settle the issue with their employer, to no avail. The department has successfully compensated Bay Area residential care workers with more than $6.8 million in overtime and minimum wage back wages and damages from 2011 through 2014. Even with hefty fines for overtime violations, employers like Precilla San Miguel cheat workers out of overtime pay. Not paying overtime is illegal and the Miguels have broken the law, period.