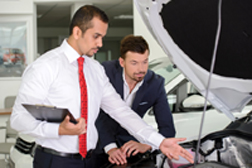 This ruling is in conflict with the FLSA (Wages and Fair Labor Standards Act) that considers “any salesman, parts man, or mechanic primarily engaged in selling or servicing automobiles” exempt from overtime. There are two exemptions applicable to salespeople in California: the “commission pay” exemption and the “outside sales” exemption.

But the default rule in California is that employers must pay all their employees overtime, i.e., to 1.5 times their normal hourly pay, or “time and a half” for each hour worked over 8 hours per day or 40 hours per week. As seen in last month’s decision, overtime exemptions are not “black and white.”

Five service advisers who worked at Encino Motorcars, a Mercedes-Benz dealership in Los Angeles, sued the company in September 2012, arguing that their job descriptions required them to greet car owners and always try to sell additional services beyond what prompted the customer’s visit, but that they did not sell cars or perform repairs, according to Law360.

The plaintiffs claimed the dealership violated the FLSA and California labor laws because they worked many hours per day and were only paid commission. Encino Motorcars argued that the FLSA overtime exemption applied to service advisers just as it does for salesmen, mechanics and partsmen who primarily sold or serviced cars, because they too sold the dealership’s services.

Service advisers diagnose what service or repairs cars need and then suggest additional work that’s not immediately needed - they are not car salesman and they aren’t mechanics. The plaintiffs argued that only workers who sold cars were salesmen and only those who personally serviced vehicles were mechanics. The Ninth Circuit agreed.

More CALIFORNIA OVERTIME News
Circuit Judges Susan P. Graber and Kim McLane Wardlaw and District Judge James C. Mahan sat on the panel for the Ninth Circuit. Judge Graber wrote that “a salesman is an employee who sells cars; a partsman is an employee who requisitions, stocks, and dispenses parts; and a mechanic is an employee who performs mechanical work on cars. Service advisors do none of those things; they sell services for cars.” Because service advisers do not fit within the above definitions, Graber said they are not exempt from the FLSA’s overtime wage provisions.