Ramon believes he was denied California overtime while working at a major hotel chain because they thought he was an illegal immigrant. “I look Mexican so they figured I had fake papers but they are illegally denying workers their rights,” says Ramon. 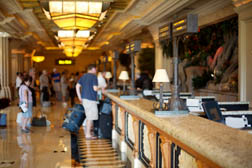 Shortly after Ramon started working at the hotel he asked the manager when he could take his 10-minute breaks. He knows that, under the California labor code, workers are entitled to a 30-minute lunch break and two 10-minute breaks in an eight-hour day. But Ramon, age 28, desperately needed this job: he was staying in a homeless shelter and going to school at the same time for a welding certificate. This job was his ticket out of the shelter.

“I worked with four maintenance men and four people worked at the front desk in shifts,” says Ramon. “If the front desk staff needed a bathroom break, they would call one of us to relieve them. I would sit at the desk and if a potential guest asked for a room, we would ask them to wait.”

Ramon says that front desk staff didn’t even get lunch breaks - they were all Hispanic. Two weeks into the job he brought up the issue again. This time Ramon went to the owner [of the franchise]. “I told him that not giving workers breaks is illegal,” says Ramon. “I was the only one complaining because everyone else was afraid of losing their jobs.”

Sure enough, Ramon lost his job. He phoned the temp agency that got him the position and they made a call to the hotel on his behalf. Ramon was reinstated, but his days were numbered. “The day I returned, the owner said I had to clock in and out if I wanted to take a 10-minute break,” Ramon explains, “but I know this is ridiculous.” Ramon printed a page from the California Labor Commission’s website regarding breaks and meal penalties and gave it to the owner.

“The owner said he would look at it later. A week later he took me aside. Apparently he heard that I complained about labor law violations and that I was looking for another job. So he told me to go ahead and find work elsewhere. I was fired again and I know that retaliation is also a California labor law violation.”

Ramon gave up school while he worked at the hotel because they kept changing his schedule. He was paid minimum wage and was supposed to be paid every two weeks but they never had a pay schedule - yet another labor law violation. Sometimes all the employees had to wait an extra week to get paid. “We were told to expect to be paid anywhere from the 1st to the 5th or the 15th to the 20th of every month. Some people have a hard time finding jobs so they won’t complain - even legitimate workers aren’t getting breaks but they are afraid to complain. Look what happened to me. But they also have a hard time paying the rent.”

A few years ago Ramon was a supervisor at a warehouse and he became familiar with California overtime law. He knows the hotel owes him for missed breaks - 20 minutes a day for every day he worked at time-and-a-half.

More CALIFORNIA OVERTIME News
“They have extreme lack of consideration for their workers and I found this very upsetting. I had no choice but to file a complaint.”

Whether or not you are legally authorized to work in California, you are protected by the California overtime laws and labor laws for the following:

• To receive a minimum wage of $9.00 per hour and $10.00 per hour beginning January 1, 2016
• To earn overtime pay - with some exceptions - after working more than eight hours per day or more than 40 hours in one week
• To file wage claims with the state labor commissioner if they believe their employer has violated state wage laws
• To file workplace safety and health complaints with Cal/OSHA, the state’s workplace safety and health program
• To work in an environment free from retaliation for exercising their rights

Posted by
Clark Kent
on July 11, 2016
I wonder what hotel is this? Those 10 and or 15 min breaks given to employee are at the company's expense. The 30 min (atleast) or 1 hr lunch, those are non paid time. that is why you need to clock out and clock back in again.