Diane had been working 10 years for an inventory company when she received a memo about mandatory lunch breaks. "Every employee was told that anytime we were going over 5.5 hours, we were required to have lunch," she says. According to California overtime laws, Diane and her co-workers are entitled to overtime compensation—a lot. 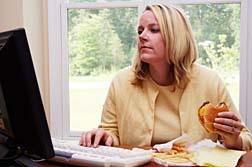 Diane (not her real name pending a lawsuit) was eventually promoted to management but still worked the same as everyone else—only more. Crews were sent to inventory mainly retail outlets and that usually entailed working while everyone else was sleeping. "Most jobs were intended to be done in 5.5 hours," says Diane, "and during that time we were allowed a 15-minute break. Often the job would take more than eight hours but I was young and stupid and like everyone else I worked with, we just got the job done.

"Lunch was never introduced as a viable option. If somebody complained about the amount of hours worked and wanted a lunch break, the boss said, 'If you really want lunch, you could have one'. But we were afraid of losing our jobs and just kept working.

About 200 people worked for this company and most everybody was like me—it was an unsaid company policy: if the job was going to take eight hours, they wanted it done in less than six hours. Travel time was another issue.

We got paid travel time from our office to the job site but we were not paid for the first 45 minutes of travel. Instead of per mile, it was per minute. Here is a typical day: we would drive 2.5 hours to Reno from our office in Sacramento but we would only get paid for one and three-quarter hours travel time, both ways. So when we got to the job site we would technically be eligible for a lunch break after three hours. But that was never even considered. We were encouraged not to think that way and woe betide anyone who said anything or complained. 'Yes you can take lunch and I will clock you out for it,' my supervisor told us when somebody on my crew finally got up enough nerve to ask. I believe that person did take a lunch but I was afraid of causing waves and losing my job.

We didn't take a lunch because we didn't have that mentality; we certainly didn't stand up for our rights, or even know our rights. Labor law issues never came up in training...

A few years ago, another inventory service got into trouble for employees working through lunch. I found out about a lawsuit through a co-worker who received a settlement. It was right around that time (April, 2006) when we got the memo saying that anytime we were going over 5.5 hours, we were required to have lunch. No mention was made of travel time being figured into that equation and no mention of back-pay compensation.

I was upholding this letter regarding lunches but only in the last three or four months did the company include travel time in an eight-hour shift.

More CALIFORNIA OVERTIME News
I am now working for a grocery store—for one of the accounts I used to inventory. I get a one-hour lunch break and two 10-minute breaks on an eight-hour shift. If you are scheduled for an eight-hour shift and you don't get lunch within the first five hours, it is automatic overtime—they make sure you get lunch. I've only been here two weeks and although I haven't worked overtime yet, some of my co-workers have been paid overtime. Working for this company compared to my last employer is like night and day—in more ways than one. I also get to work days, for the first time in 20 years.

I talked to the California labor board and I can claim overtime compensation for lunches but there is a gray area when it comes to overtime. A claim can only go back so many years and I was management for the past 10 years and considered exempt. But that's a whole other issue…"