Danny had neck surgery that involved a Medtronic Infuse Bone Graft used off-label. Had Danny known the procedure was not approved by the FDA, he would never have agreed to the Medtronic bone surgery. But Danny agrees with his lawyer and has filed a Medtronic lawsuit. 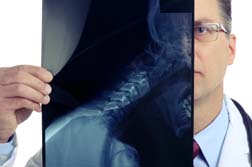 “After falling off my deck my arm was numb and the pain in my neck was increasing,” Danny explains. “I had a battery of tests, including an MRI that showed a broken bone in my neck was trying to cut into my spinal cord. There was no hesitation - I had to get surgery.”

Danny was told that the bone was going to be fused: they would go in through his neck and take out old bone and replace it with the Medtronic Infuse bone graft. “I wore a collar for about six months after that and it felt better, but that was short-lived,” he says. “The pain and numbness increased, and a few months later, almost every time I turned my neck, I would hear popping and snapping.” Danny also says his breathing was getting worse, to the point that he required hospitalization.

Danny was given bad news: the hospital doctors wanted to perform a tracheostomy, which is a surgical procedure to create an opening through the neck into the trachea (windpipe). The trachea is the airway that brings the air into the lungs and can sometimes be obstructed, which results in an inability to breath. Trachea obstruction can be caused by swelling, neck, mouth or nose injury, the presence of a foreign object, a tumor or the paralysis of the throat muscles. As well, there is a known association between Medtronic bone graft and difficulty breathing, speaking and swallowing.

“The doctor gave me a choice: the surgery or putting me on a ventilator,” says Danny. “At this point I didn’t trust the hospital because of this Medtronic surgery going so wrong. Besides, the thought of having a tube that I would have to eat and talk through was horrific. Suffice to say, it has been really tough.”

Danny, age 48, decided not to have the procedure. Instead, his doctor placed him on lifetime disability and Danny says he is getting by - barely. He is certain the breathing complications were caused by the Infuse Graft.

“I have never smoked and I was in good shape before this injury,” he says. “At one time I had chronic bronchitis and a slight asthma problem when I was a kid, but I don’t think it was ever officially diagnosed. I’ve really been in the dark about this for too long. Nobody ever talked to me about why this surgery has gone so wrong. Last year I saw a TV commercial about Medtronic Infuse lawsuits and I realized why all these side effects were happening.

“So I found an attorney through LawyersandSettlements and he told me the Infuse Bone Graft was never intended to be used in the neck. I was shocked - why would a doctor do this? I started to collect all my medical records. I also tried to contact the surgeon but he is no longer with the Borgess Brain & Spine Institute here in Michigan. I find that odd because I also had two back surgeries he did and no one will tell me where he is or why he is no longer a surgeon at their facility. Who knows, maybe the doctor got paid to do off-label surgery, like an experiment, and I was the guinea pig. And maybe this is why he is no longer a surgeon.

More MEDTRONIC INFUSE BONE GRAFT News
“My attorney advised me to get a referral from my GP to see another doctor. I’ve been on heavy pain killers ever since the surgery and I think the pain is worse now than ever before. I think that Medtronic shouldn’t have marketed their product off-label to doctors and my doctor shouldn’t have used it off-label. I just hope a Medtronic lawsuit stops them from doing this surgery on other people. I wouldn’t be surprised if they are making millions of dollars off victims like me.”

In December 2011, Medtronic agreed on a $23.5 million settlement with the US Justice Department, which alleged the company paid doctors between $1,000 and $2,000 per patient to implant its pacemakers and defibrillators. It is also alleged that Medtronic reps illegally marketed its Infuse Bone Graft off-label, particularly for neck surgery. A number of personal injury lawsuits, including a wrongful death suit (a California woman died after neck surgery), have also been filed against Medtronic.

Medtronic is considered to be the fourth largest medical technology company in the world, with its spinal business accounting for 18.9 percent of total revenues.