Scott had no idea that his difficulty swallowing could be linked to a Medtronic Infuse bone graft. He was only aware of Medtronic complications when bone began to grow outside of the graft. Ironically, Medtronic is now selling a device to help with swallowing complications! It’s hard to swallow, but could Medtronic be double-dipping? 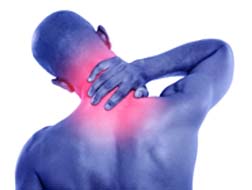 Scott had two neck surgeries in 2010, both with Medtronic bone graft implants. Scott’s doctor explained that he had one ruptured disc. “Just a few months after the first surgery, I needed another one because the disc above or below was bad,” says Scott. “I thought the first surgery fused the vertebrae but I think this bone graft caused damage to the next disc.

“I went back to the surgeon again. He told me that bone was growing outside the Infuse bone graft but there was no reason to do more surgery. Before having this surgery, I understood that the graft was going to contain everything but this isn’t the case with me.”

Scott, age 46, isn’t sure why his surgeon said it was okay or why bone is growing outside the graft. He is on disability due to a back injury at work and can’t afford the cost of co-pay to see another doctor.

“I’ve had problems swallowing for some time and it’s getting worse,” says Scott. “Now that I think about it, this problem started not long after the surgery. It happens sometimes when I eat dinner and when I eat too fast. If I am stressed, it bothers me too. It scares me when I get this swallowing problem with food because I think that I am going to choke. It is especially worrisome when I am by myself. When it happens, it is hard not to panic - imagine having a golf ball stuck in your throat. That’s what it feels like.”

Scott says he is also in constant pain, from his neck and throat and into his shoulders. Because the pain was getting worse, he filed a claim regarding problems with the bone growing outside the Infuse bone graft. Scott hopes to join a Medtronic lawsuit, along with other people who have similar complaints, including difficulty swallowing.

Medtronic’s involvement with its latest campaign to help those with swallowing difficulties and its purchase of a device to treat the problem is baffling, to say the least. And ironic?

More MEDTRONIC INFUSE BONE GRAFT News
Last month Medtronic supported a fundraising campaign in Ireland called Lollipop Day for oesophageal cancer (the company is based in Ireland). The organizers on their website said that

“We are calling on people to support Lollipop Day, supported by Medtronic, by purchasing a lollipop and urging those experiencing swallowing difficulties…to attend their GP for advice.”

And another irony. If you experience swallowing disorders associated with the Bone infuse device, Medtronic can sell you another device (Sapiens Steering Brain Stimulation) it recently purchased to treat “side effects from existing U.S.-approved devices, including speech and swallowing disorders, muscle spasms and sensory disturbances.” Medtronic doesn’t go so far as to say its product is one of those existing US-approved devices.

Posted by
Tamara Teague
on May 26, 2015
Are attorneys still hopeful for a lawsuit to go thru! I'm with you all the way if so. I want a win! Is there something I can do to make difference? Please if so I'll sure try.
Posted by
Ralph lindsay
on April 21, 2015
I also had two surgeries firsts was infuse c3-c5 disc failed to fuse so he revised it packed it with more infuse extended my fusion to c7 after second surgery I ended up going to emergency room at two in the morning because I could not breathe said was do to swelling after surgery gave me breathing treatments and sent me home bout six.ended up having paralyzed vocal chord so had surgery to fix that . And I'm 43 my dr told me infuse was 100 percent fusion rate on first surgery using infuse and after all that I need an additional surgery because I have loosing of screws and subsidence along with a failed fusion at c5-c7 and new dr wants go through the back but I do not want to go through anymore surgeries . Would not go with infuse ever.im in more pain now than ever before have bilateral radiculathapy,occipital neuralgia along with list other stuff all because of this stuff.
Posted by
Lisa
on March 31, 2015
I had neck surgery a year ago and I to have suffered with swallowing complications. I do not know if the doctor used Medtronic Infuse Bone Graft. I had all three discs fused.