Allen, a Medtronic Infuse bone graft victim, is reading with great interest a Medtronic class-action lawsuit filed by its investors, claiming that Medtronic intentionally misled them and charging the CEO in a cover-up. 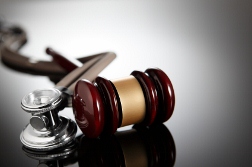 The outcome of this lawsuit may be good news for Allen and thousands of other Medtronic claimants. If a jury decides that Medtronic officials were fraudulent about Infuse’s problems, more people suffering from Medtronic injuries could sue the company. However, shareholders who sued Medtronic over Infuse in 2008 received an $85 million settlement in 2012, but Medtronic admitted no wrongdoing. According to the Star Tribune (October 12, 2014), if Medtronic settles this current class action without admitting wrongdoing, experts say the chances of injured Infuse patients proving fraud diminish.

Allen, age 46, underwent two surgeries, one five years ago and the other three years ago, involving a Medtronic Infuse bone graft, for the same problem. Now he has bone growing outside of the graft in his neck.

“I feel worse now than I did before this Medtronic fusion,” says Allen. ”The surgeon cut through the front of my neck and I can’t see the new bone growth but inside it constantly hurts. It’s like I have a constant spasm in my neck and sometimes when I try to swallow, my throat forgets how to swallow. If I drink or eat, it is stuck in my throat and finally I get it down, but that is really scary because I can’t breathe. I am scared to have this Medtronic device taken out because it might be even more dangerous.”

Allen hasn’t told his surgeon about the swallowing issue because he is afraid that his surgeon will advise yet another fusion. Meanwhile, Allen’s Medtronic attorney is getting all of his medical records from the surgeon. “My attorney said that I might have to wait up to six weeks to determine whether my claim will go forward, so this latest lawsuit against Medtronic might have some bearing…”

Allen had no idea that Medtronic had been sued by thousands of people like him until he saw a commercial on television. “The commercial said time may be running out to make a claim so I called an attorney, and then I read online about people’s complaints that sound just like me,” he says. “I have been in and out of hospital with staph infections from these surgeries and that pretty much messed up my life. If this Medtronic claim is all I have left, then I won’t let it pass me by. I also want to add that my neck surgeon is a great doctor. I read that these complaints are not against the doctor, they are against Medtronic.”

More MEDTRONIC INFUSE BONE GRAFT News
A federal judge in Minneapolis will let lawyers for Medtronic investors investigate the purported cover-up of Infuse’s dangerous side effects by Medtronic officials and doctors the company paid to do research, reported the Star Tribune. As for the former Medtronic CEO William Hawkins, he has been accused of manipulating scientific research to cover up Infuse problems. Further, he allegedly made misstatements to stock analysts to hide the fact that the FDA had refused to approve the next iteration of Infuse, a product called Amplify.

The shareholders’ class-action suit claims that Medtronic intentionally misled investors by shaping Infuse research done by doctors to whom the company paid $210 million from 1996 to 2010. And in some instances, Medtronic edited results of studies to overstate the usefulness of Infuse in patients recovering from spinal surgery while downplaying harmful side effects, including abnormal bone growth into nerves, male impotence and risks of cancer.

Posted by
Dee
on December 4, 2015
I had an ACDF in 09 thru anterior of NECK-not ok about 2012 all kinds of issues vomiting, unexplained problems, couldn't lift arm(s)..at times headaches, trouble swallowing voice was raspy sick all the time in and out hospital.Finally 2012 had xrays at a walk in clinic Dr discovered a 2-3 inch empty space in my neck he said your neck is broken and you have bits and pieces of substance (hardware) broken like glass or something which mustve explained the pieces traveling around hitting nerves causing me not to be able to control my upper limbs..not to mention the pain and not being able to stand straight up. I immediately went back to surgeon who performed original in 09.He was stunned said hed never seen anything like this..he dismissed me til he cld speak to his colleagues-next time totally different denial nothing to be concerned with according to his newly found conidence. I sought out a top surgeon in CA all the way from the other side of the map on my own. This DR just happened to be a speaker at the conference about not using this product on the neck twice 2008....in 2009 this dr who was present at that conference did it anyway,,,,I had the Ca surgeon revise my neck..he told me it was life threatening he didn't know how I made it this long I had such a large empty space in my neck he didn't know how it was holding up and he did say in his opinion this dr acted beneath standards of care & a top law firm in CA claimed Id already have a malpractice suit settled if that case had happened there originally unfortunately although theres still time I cannot find an atty to represent me for a malpractice in this county..so I had the revision done the Dr found all kinds of things wrong inside from damage to esophagus trachea...overgrowth other words..many...too much...I had to have 2 more disc done this time and I was 2 inches shorter than normal.I immediately got proof as soon as I realized this was fishy I am a nurse ironically a surgical nurse with a BSN working on Masters..Haven't been able to work so I go to school in a couple of classes to try to get past physical to be able to support myself and daughter someday hopefully..im on disability which isn't enough I also have nodules on my lungs and I heard this has been linked to lung cancer I do not smoke .I do recollect the pituitary gland carotid artery and some very dangerous borders being affected.havent finised reading entire report yet.Im having a problem knowing if an atty has taken my case since Im not getting answers fast enough Im still open for representation.Someone please help me!
Posted by
Jay
on September 15, 2015
I had my first fusion in 2003 at C6-7 anterior. Then the Next year I had some Bone spurs removed and debarment done posterior. Then In 08 Ihd to have it all re done Anterior C2-7. 4 months Later Osteoporosis set in and lost most of the Bone so they went back Posterior with A pice from my hip and BMP2, rods and screw's and put me back together again. I havent been right since the sugery, I have had difficulty swallowing, Headaches, Neck and shoulder pain, limited movement, swelling, did I mention the pain and the lack of sleep? 7 years later I'm having to go in for MORE testing cause no one will admit in this state that BMP2 Might be part or all of the cause of my problem.
Posted by
B.Young
on January 12, 2015
My doctor installed a artifical disc in l4 and medtronic bonegraft in l5 s1 with out my knowledge and lied in his notes and said he discussed this with me and the dangers of it. Now I have ectopic bone growth in the area and I have a non union. The device did not fuse and I have been in serious pain for 7 years. My doctor sent me to a class to show me what he was going to do and it was not the infused,he said it would be allograft or from my hip it was a lie. Dont trust Dr.Mark T.
Posted by
Alfreda Rodgers
on December 7, 2014
From what I have read Doctors were getting paid $2,000 for every surgery they performed. My son died because of this I legal surgery!