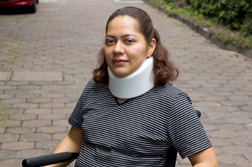 Even though the FDA issued a warning that there were risks associated with the use of the bone graft on the cervical spine (i.e., neck) and that the InFuse had caused "life-threatening complications" back in July 2008, Medtronic sales representatives still allegedly encouraged physicians to use the InFuse Bone Graft off-label. Even though the FDA has approved this medical device only to treat degenerative disc disease (a spinal condition) and open fractures of the tibia—any other treatment is considered "off-label" and not FDA-approved—it was still marketed for neck surgery.

In December 2008, The Wall Street Journal reported that a California woman went into respiratory arrest and died after neck surgery. She was "kept alive by artificial means" and passed away August 30. The family of the woman filed a wrongful death lawsuit, claiming that her death was due to the InFuse Bone Graft.

Her surgery took place on August 21, 2008, about seven weeks after the FDA had warned that InFuse in-neck surgery had caused "life-threatening complications," and about two weeks after the WSJ (09/08/08) reported that FDA records showed approximately 200 patients who had experienced serious complications after the bone graft was used—the majority of the complaints were due to off-label use.

Other serious complications associated with the Medtronic Infuse Bone Graft include inflamed tissue (caused by the artificial protein contained in the device) and possibly bone growth in areas outside the surgical site if the device isn't properly placed or Infuse Graft materials leak.

Although promoting a drug or medical device "off-label" is illegal, it is legal for health care professionals to prescribe an FDA-approved drug or medical device for a non-indicated (off label) use, such as using antidepressant Chantix as a smoking cessation medication, or in this case, the InFuse bone graft in neck surgery. A number of lawsuits allege that Medtronic representatives actively promoted the Infuse Bone Graft for off-label use, even with the knowledge of serious risks involved.

More MEDTRONIC INFUSE BONE GRAFT News
In January 2009, the FDA issued a "Guidance for Industry" that limited what drug representatives and other individuals could distribute to "back up" unapproved uses of new drugs. The guidelines are very specific regarding false and misleading information and individuals can only demonstrate the credibility of its product through publications that use only letters to the editor, publication abstracts, and reports of Phase 1 trials in healthy subjects from peer-reviewed journals with recognized editorial boards. Further, the publications should be generally available in bookstores or other independent distribution channels where medical textbooks are sold. In other words, the information should be available to healthcare professionals and the public.

According to Infuse Bone Graft attorneys, Medtronic has not complied with the FDA's "Recommendations for Good Reprint Practices," and more…

Posted by
Elvis Hernandez
on June 12, 2012
I have researched for cervical fusion complications and ran across this web page with now even more concern and need legal consultation as I have had a cervical fusion 7/2008 since then continue some mysterious symptoms that have no positive recourse and don't understand why? Since I have had this cervical fusion done with a stimulator growth equipment over the years have had severe edema in both legs with testicular pain and ejaculation with increased ejaculation pain in the urethra primarily and right testicular pain, many test were conducted without a significant finding in its cause meaning negative results, my pain management Dr. has requested these test and my primary Dr. has also made referrals to urologist, cardiologist, with arterial blood flow in bi lateral legs, all test have not had any positive results, don't do recreational drugs and alcohol, or seek out multiple partners.
I have had these ongoing symptoms without a positive result of comfort, I have tolerated the ongoing symptoms, find it getting worse including stiff neck at times and now a most recent pain on the right lower backside of right ear moving forward into front upper right of temple starting a severe migraine headache which I have an appointment to see pain management Dr. located in the same office with my nuro surgeon who performed the cervical fusion with a titanium rod at the C4-C5-C6 bilaterally.
I would like to continue speaking to an attorney regarding my legal rights for information being withheld or possibly misdiagnosis in the respected ongoing case with Infuse Bone Graft, In addition had a bone graft done at a dental office for a pulled tooth if have any relation as i strongly believe that some of these composite came out and ingested which may have caused stomach irritation and abdominal and intestinal pain also documented at primary physician and gastrointestinal Dr. office since this just came to mind other possibilities for ongoing symptoms.

Thank you for your time and attention as my health depends on determining the causes for my symptoms.