The Car Crash Didn't Kill You, But the Flight to the Hospital Could…

Testimony at a 4-day hearing conducted by the National Transportation Safety Board (NTSB) is uncovering some startling insights as to why there have been so many medivac helicopter crashes over the last several years.

It appears, because medical transfers by helicopter have become good business.

The carnage is simply tragic. A total of 53 crashes since 2004 have claimed the lives of 77 people: pilots, nurses, paramedics—and even more tragically, patients who have already suffered physical and emotional trauma. 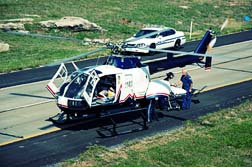 Medical transfers of trauma patients by air are still considered to be, overall, the fastest and most efficient way to transport patients to hospital, or between hospitals, when time is of the essence. And government, or police services are said to have a spotless record in this regard.

The problem, according to testimony put forward at the NTSB hearings, and in revelations reported by investigative journalist Brian Ross of ABC News with Charles Gibson, is that Medicare and insurance companies are willing to pay up to $10,000 per flight.

That creates a strong business incentive for helicopter companies. They are said to be lining up for the flights, which are now dispatched at a rate of about 1000 each day in the US. It has also been reported that most of the flights are for non-emergency situations.

In this way, the air ambulance has taken over from land ambulances. And indeed, air ambulances can be faster. There is no delay from traffic gridlock, for example.

However, unless it's a blinding snowstorm, heavy fog or freezing rain, there isn't a lot Mother Nature can throw at a land ambulance that would prevent it from embarking on a road transfer.

A helicopter, however, is a different matter. Adverse weather conditions, poor visibility or other factors can rightfully ground a flight. However, intense competition from competing helicopter companies is pushing margins for safety to the extreme.

It is alleged that too many helicopter companies will accept a transfer when it is not safe to fly. Sometimes, when one medivac helicopter provider refuses to fly based on weather or atmospheric conditions, another competing company will take the job. Flight experts agree that if one company refuses a flight due to safety concerns, they all should.

That hasn't been happening. There is also concern that too few companies have invested in night vision goggles, and other safety equipment that would help them see, and navigate in adverse conditions.

"Some may say we're in the business to save lives," said Robert Sumwalt, a member of the NTSB, in comments posted by ABC news "But what they're really in the business to do, like any other for-profit company, they're in business to make money," he said of the helicopter companies.

Stephanie Waters is but one victim of one of those helicopter crashes, many of which are now considered preventable. According to testimony, a practice known as 'helicopter shopping' resulted in a helicopter carrier accepting a flight that had been turned down by another due to concerns over weather. The helicopter on which Stephanie Waters was serving as a paramedic crashed last June in Huntsville, Texas. All 4 occupants died.

Also brought forward at the NTSB hearing is the fact there is no requirement for a centralized dispatch system, the kind currently in operation in the State of New Jersey. There, a central dispatch integrated with the New Jersey State Police works with a number of different carriers—and safety is a primary concern. In 20 years of air ambulance transfers in New Jersey, there have been no accidents at all

"We make a decision solely on the safety of flight," said Captain Jack McKevitt of the New Jersey State Police. "We always know the aircraft is in top notch condition and we have no pressure from anybody whether to take a flight or not take a flight."

More HELICOPTER CRASH News
That last remark is telling. So too, is the revelation that "of the 55 accidents we looked at," said Sumwalt, "we found that 29 of those 55 could have been prevented if any of the four recommendations that we issued had been implemented." Those recommendations, issued years ago, include the equipping of helicopters with night vision goggles, and terrain detection devices.

Until that happens, and so long as helicopter carriers are allowed to compete in order to snag a piece of what is becoming a lucrative air medivac transfer pie, it is not beyond the realm of possibility that medivac helicopter crashes will continue to be a factor. Intense competition, fear some safety advocates, will compel competitive operators to take unnecessary risks—not in the name of safety, but in the name of the Almighty Dollar.

Given such revelations, it is understandable that lawsuits will be a common occurrence in association with such accidents, until the situation is dealt with effectively.

Sadly, in the end the car crash may not have killed you. But the flight to the hospital might…