Helicopter Crash Kills Two, while Victims of Another Settle Lawsuits

A helicopter crash involving an air ambulance claimed two lives earlier this month. It could have been worse: The helicopter was in the midst of a test flight and was carrying no patients. 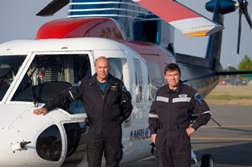 The Forth Worth Star-Telegram reported on Thursday that a Bell 222U helicopter recently acquired by CareFlite was on a maintenance flight on June 2 when the crash occurred. The pilot and a mechanic had taken off from Grand Prairie Municipal Airport when it crashed into a field near Midlothian, Texas just after 2 pm. The crash site was about 24 miles south of the airport. The two were taking the aircraft on a maintenance check flight to prepare the helicopter for a Federal Aviation Administration (FAA) inspection when the helicopter went down.

The National Transportation Safety Board (NTSB) is investigating.

Officials are trying to figure out if there was a problem with the tail boom and main rotor, which separated from the wreckage. The Bell 222U series helicopters were manufactured in the 1980s and are pushing 30 years of service, but the industry regards them as reliable, provided they are properly maintained. There is no particular history of safety deficiencies.

The line of helicopters acquired their FAA certification in 1979. The particular helicopter that crashed was manufactured in 1983. CareFlite, a company that provides medical air transport services across North Texas recently acquired the aircraft and was in the middle of performing required maintenance before putting the helicopter into active service.

The company employs 30 pilots and owns two other Bell 222U aircraft, both of which have been grounded pending the outcome of the crash investigation.

Meanwhile, it has been reported that the families of seven men killed and three individuals injured in the spectacular crash of a firefighting helicopter on August 5, 2008 have reached a tentative settlement with three defendants. Nine of the 13 on board died in the Northern California crash.

More HELICOPTER CRASH News
According to a 6/4/10 report in the Oregonian, the main rotor of the doomed Sikorsky S-61 helicopter lost power during take-off. Witnesses at the time reported that the helicopter was taking off more slowly than normal. The aircraft clipped trees and never achieved proper flying height before bursting into flame and slamming into a hillside.

There were five defendants in total, including Sikorsky—the manufacturer of the helicopter—and General Electric, which was responsible for building the engines.

The proposed settlements grew out of mediation presided over by Judge Edward Levy of the Ninth US Circuit Court of Appeals.

Settlement amounts were not disclosed and final figures have yet to be worked out, but at least two lawsuits had sought $10 million for each victim of the helicopter accident.