One Dead, One Injured in South Carolina Helicopter Crash

More HELICOPTER CRASH News
One man was killed and another was severely injured in a helicopter crash at McEntire Joint National Guard base in Richland County, South Carolina. 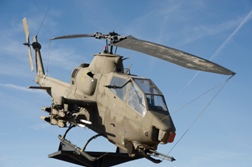 The two men were flying in an AH-64 Apache attack helicopter and had just finished running a training exercise when the incident occurred. Eyewitnesses claim that while the vehicle was taxiing, it suddenly spun out of control and flipped over for still-unknown reasons. There were no weapons aboard the aircraft when it flipped, according to CountOnNews2.com.

First Lieutenant Jonathan Shivley Jr. of Jamestown, a nine-year veteran of the National Guard and the pilot of the helicopter, sustained severe injuries and died on the scene. Warrant Officer Roger Carpenter, a passenger, sustained less serious injuries and was listed as being in stable condition.

Military officials are still investigating the cause of the incident and have ordered all other AH-64 helicopters to remain grounded until they can determine whether the crash was the fault of the pilot or a mechanical error.