In what appears to be becoming a tragic epidemic of helicopter crashes, another medical helicopter has gone down in flames—this time in a Chicago suburb. Three crewmembers and the patient were killed.

Deepening this tragedy, and that of other recent medical helicopter crashes, is the fact that patients have already suffered great trauma, only to suffer more trauma, or to lose their lives when the craft that is supposed to play a role in saving their lives, instead contributes to, or causes their death. 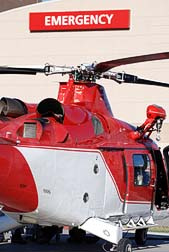 The patient in the crash late last night, just before midnight, was only 13 months old.

Wednesday's crash was the ninth in the last 12 months involving an emergency air transport vehicle, and the third for Air Angels, and air ambulance company based at Clow Airport in Bolingbrook. A crash in August of last year was blamed on mechanical problems, but fortunately there were no injuries. The same, however, could not be said for a crash in 2003 that killed the pilot. It has since been determined that pilot error, and foul weather contributed to the crash.

However last night's helicopter crash remains a mystery. The CEO of Air Angels, Jim Adams, reportedly told the Chicago Tribue in the wee hours this morning that the pilot did not report any mechanical problems with the helicopter, and that weather was not an issue.

However, a report in the Chicago Tribune suggests that the Bell 222 helicopter struck a radio tower before it crashed last night. Rick Jakle, president of 1280 AM WBIG in Chicago said early this morning that the helicopter apparently clipped one of the radio tower's support wires. The tower extends 750 feet into the air, and by law is required to be lit, with strobes, to alert aircraft to its location at night. However, it is not known if there is any provision for illuminating the thick support wires.

The Federal Aviation Administration and the National Transportation Safety Board will be investigating the crash.

A spokesperson for the Aurora Police said that the medivac helicopter was enroute to Children's Memorial Hospital in Chicago from Valley West Hospital in Sandwich when it crashed into a field near a residential area in east Aurora, before bursting into flames. There were no injuries on the ground.

More HELICOPTER CRASH News
A spokesperson for Children's Memorial Hospital revealed that the 13-month-old patient was an infant girl who was being transported to Chicago due to epileptic seizures, although Julie Pesch later said that the child's symptoms remained unclear.

Besides the child who died in the helicopter crash the pilot, a nurse, and a paramedic employed by the company all perished in the crash. There were no reports of survivors.

It was reported that the young patient was originally transported to Central DuPage Hospital. However that facility was full. The resulting transfer to Children's Memorial, sadly, proved fatal.

Critics are calling for an investigating into the entire air ambulance system, after nine fatal helicopter crashes in the last year. They cite a disturbing rise in the number of emergency air transport crashes, and wonder aloud if a system designed to save lives, may instead be taking them.