Attorney Sean Rutledge from the United Law Group in Irvine, California spends more hours than you can imagine mowing through mounds of paper, writing letter after letter to banks trying to arrange loan modifications for clients teetering on the brink of foreclosure. "Unfortunately," says Rutledge, "the banks continue to phone and harass homeowners and use every possible excuse to delay a final decision on loan modifications." Judging from what Rutledge and his firm have experienced the last few months, the situation for homeowners is appalling. 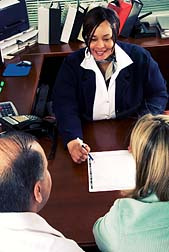 We are trying to keep people in their homes!
Rutledge is getting a little hot under the collar as he speaks and when you hear what he has to say, you can understand why.

According to Rutledge, it takes his firm 30 days from start to finish to prepare and file a loan modification application with a bank on behalf of a client. Once that's done the bank has to back off and negotiate with the borrower or their agent, usually a law firm.

Homeowners are so frightened by calls from the bank that they will often come up with something, anything to keep the bank away even though they have filed for a loan modification. "The banks will tell them to draw money on their credit card or borrow from family," says Rutledge, "they'll tell them they haven't received any documents from our firm!"

The problem is, once a scared witless homeowner makes a payment to the bank, they jeopardize their loan modification application. "The bank then argues that the homeowner made a payment so they can't be in financial difficulty," Rutledge fires back.

Not only are the banks dragging their heels and breaking the rules, scam artists disguised as legitimate loan modification agents have slipped a dog into the fight and are stealing the last dollar from the hands of weary homeowners on the verge of foreclosure.

"For example, someone from Florida called me and said, 'what's happening with my loan modification application?'" says Rutledge and he is really fuming now. "He said he gave $5000 to a loan modification company that said it was preparing documents for the United Law Group. We checked our records and we've never had anything to do with them. The guy had been scammed!"

The whole process is so riddled with deception, delay, fraud and mistrust that it is making it difficult for legitimate law firms such as Rutledge's firm, the United Law Group, to get their clients loan modifications completed.

"My clients are freaking out," says Rutledge. "Clients are asking 'what is going on? Are you really doing the legal work'? They call us because the lenders continually contact them and say 'oh well, that law firm we have never heard of them.'"

"We have 14 people at our firm who do nothing but contact clients and update them on their file and reassure them," says Rutledge.

More Consumer Fraud News
Not only are his clients distressed by the calls, the problem isn't getting resolved. "The banks were promised money from the government to deal with loan modification and we think they just think 'delay, delay, delay' until that money comes through," says Rutledge.

To be fair, Rutledge admits the banks are overwhelmed with the volume of applications, but that doesn't help his clients. "We tell our clients just don't talk to the banks when they call no matter what they say," he adds.

And trying to deal with the banks yourself or hiring a loan modification company is definitely risky business for homeowners in trouble. "Hire a law firm," says Rutledge. "A firm can be disbarred, these other guys have nothing to lose by taking your money up front."

Sean Rutledge is a graduate of the University of Miami School of Law (J.D.) and the Idaho State University (B.A.). He is also a member of the American Civil Liberties Union and the Orange County Bar.

Click to learn more about LawyersandSettlements.com
LawyersandSettlements.com - A trusted, independent legal news provider bringing quality news and information on legal cases and lawsuits filed in the United States of America to its readers since 2002. Over 650,000 legal help requests including Financial Cases, and Real Estate Cases have been forwarded to lawyers all across to the country.