With the price of gold skyrocketing to $1000 an ounce and more and millions of people struggling through difficult times, companies offering cash in exchange for old jewelry and other precious metals items are drawing a lot of attention. Unfortunately, many Cash4Gold customers are crying consumer fraud and the company is now the target of a class action suit. 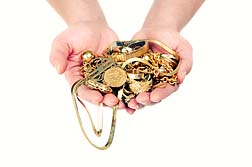 The Cash4Gold Company, headquartered in Florida, lists dozens of satisfied customers who mailed in their old jewelry and were apparently delighted with the money they got in return.

However, New York attorney John Balestriere, from the firm of Balestriere Lanza, has been hearing from other customers who believe they were ripped off royally.

"We keep hearing from people who have been complaining to the Better Business Bureau and journalists for a long time," says Balestriere, who has just filed a class action against the Cash4Gold Company.

"We have spoken to quite a few people who a few years ago would not have considered selling their jewelry but now given the economic situation..." Balestriere adds. "Some of the stories are heartbreaking. There was a woman who sold her jewelry – although sold is really not the right word --- she rather attempted to sell her jewelry because she needed to buy food."

The complaints from plaintiffs all sound very similar according to Balestriere. Consumers send in their valuables but get no response. If and when the consumer gets through to Cash4Gold's customer service line, the company says they have no record of any items being mailed in.

"So did they steal it?" Balestriere asks rhetorically. "I can't say that," he says. "But they are certainly not careful, and their lack of carefulness accrues to their benefit."

Cash4Gold advertises itself as a precious metals clearing house. Send in your valuables, it will assess the value and pay you cash. The precious metals are then melted down in bulk and resold to wholesalers.

"So if that item is lost, which could mean there is no record of it coming in but it somehow gets melted down, then Cash4Gold is making money," says Balestriere.

Balestriere says that further aggravating the situation is the fact that it is very difficult to get through to the customer service line. And, when people do act persistently Cash4Gold sometimes offers them a flat payment even if they claim to have no record of having received anything in the mail.

"People call customer service, they're put on hold, they go back and forth and eventually the company says, What do you think its worth?' " says Balestriere. "Then eventually Cash4Gold says, 'Well I can give you $50 for it'."

More Consumer Fraud News
"Just think about it," says Balestriere, a former attorney with the New York attorney office who spent years investigating and prosecuting organized crime. "If you call me up and say you sent me something and I don't have a record of it, I am not going to be shaken down; I am not going to offer you any money.

"I think it is actually indicative of the fraud," Balestriere adds.

John Balestriere is a graduate of Yale School of Law. Prior to going into private practice at Balstriere Lanza, he worked as a law enforcement lawyer with the State Attorney General's Office and with the Manhattan District Attorney's Office where he assisting in investigations of organized crime and political corruption. Balestriere Lanza is a trials and investigations law firm focusing on allegations of fraud and misconduct.