Class Action Attorney Wants to Know "What's in Their Wallets"

Capitol One, marketed as the "hassle free credit card," is being sued for consumer fraud by some disgruntled customers who are fed up with the company asking them for more and more of "what's in their wallets." Over the last 10 months, the company has tripled borrowing costs for cardholders. Attorney Adam Webb, who represents some of those very annoyed customers in a consumer class action lawsuit, says Capitol One clearly abused its discretionary powers. 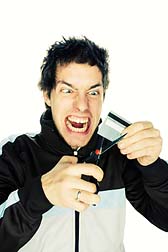 "What is really bad about this is that the rate hike was applied to existing balances as well as new purchases," says Webb. "They jacked up the rates without any late payment or missed payment history. It is just an automatic increase of 10 percent and up!"

Webb says people who were just able to scrape by and make a $120 payment suddenly overnight found themselves faced with an unmanageable $360 payment. "The way it has affected the name plaintiffs in our case is pretty dramatic," he adds.

A clever advertising campaign and its low flat interest rate strategy made millions of Americans into Capitol One cardholders. Over the last few years, the company emerged as one of the top two credit card companies in the US.

In its defense, Capitol One notified customers by mail and offered them an opportunity to pay off the balance at the old rate if they canceled the card immediately. But, as Webb outlines in the complaint, "Capitol essentially laid a trap for the unwary."

"The problem is, many people needed to use the card," says Webb. "And if you get rid of an account that has been in place for some time you lower your credit score."

What's more, Webb says, "Many people did not receive notices, or did not understand them."

Credit card companies do have the power to raise customer rates but it is generally because of a history of late or missed payments, or a downward change in the customer's credit rating. "Those are generally understood to the basis to maybe increase people's rates, but not people in good standing, not tripling their rates. That is an abuse of that discretion and an abuse of good faith," says Webb.

More CONSUMER FRAUD News
A highly regarded attorney with a kindly and concerned manner, Webb despairs of the financial industry's grasping and unceasing appetite for fees, charges and self-dealing. "They can take money from fed for nothing," says Webb, referring to the recent bailout of overextended banks, "and then turn around try to make 17 percent off the little guy.

"A lot of people find that disgusting."