Attorney Jan Schlichtmann has a way of hitting hot buttons: His latest class action suit filed on behalf of 3 drivers who claim they have been paying an unfair toll road tax could set the Massachusetts Turnpike Authority back $300 million. "Ya, I guess I do have knack for getting into these kinds of things, but the principal is a really important one and it is important for my clients," says Schlichtmann. 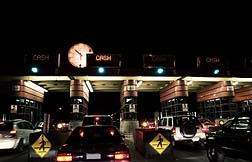 The chemical company fighting attorney became an American icon after he was portrayed by actor John Travolta in the movie "A Civil Action". In real life, Schlichtmann looks more like Richard Gear than Travolta. "I have heard that from a few others," he quips. But he doesn't want to talk about that, he wants to talk about consumers taken for a ride by bureaucrats and what he describes as an "unconstitutional tax".

All that aside, just a few days into the complaint he has filed against the Massachusetts Turnpike Authority, hundreds and maybe thousands of people by now and dozens of organizations have contacted Schlichtmann's office wanting to become members of the suit.

The suit maintains that the tolls on the Massachusetts Turnpike amount to "an illegal tax" because according to Schlichtmann, tolls can only be used to fund the roadways for which they provide access. And for years now, more than half of the toll commuters pay has been going to pay for Boston's Big Dig project.

The Big Dig, as it known around Boston, is the highway megaproject to convert the city's main highway in to an underground tunnel. Over the years the project has been plagued by fraud charges, deaths, leaks and most famously budget overruns that make it the most expensive highway project ever undertaken, costing an estimated $22 billion.

"This has been going on for years and it involves hundreds of millions of dollars from toll payers that are not going to toll services," says Schlichtmann. "The money is going to everything but toll services including the debt from the Big Dig." By Schlichtmann's estimate about 58 cents of every toll charged goes not the Massachusetts Turnpike roads but to pay for cost overruns on the Big Dig.

More News
"Of our named people in the suit, they were paying over $1200 a year of which 60 percent of it was going to things that had nothing to with them and was being used by millions of others who were not paying anything for its use," says
Schlichtmann.

"It has become a very pure legal principle--is this a toll or is this a tax?" says Schlichtmann. "The facts are very simple," he adds. "We are hopeful that the courts in a very short amount of time will be able to make a ruling redeeming this important American value, no taxation without representation."

Winning the suit may turn on whether or not road tolls will have to fund the roadway on which they are charged. Schlichtmann argues "There have been several cases in which this principle has been affirmed, but nothing on this scale."

Jan Schlichtmann practices in the areas of civil litigation, mass torts, class action and environmental and toxic torts. He obtained his J.D. from Cornell University in 1977.